New York is colder than most states in the Union. While you probably won’t appreciate it on your trip, it means there are plenty of ice fishing opportunities. There are several lakes in the state that offer trout, bass and other popular fish for anglers to catch.

There are many different lakes to choose from, each with their own advantages and draws. Let’s take a look at each one in turn so you can pick your must-see lakes this New York ice fishing season.

Much of this lake is in Vermont. However, Vermont and New York share this lake allowing anglers from each state to fish there. Therefore, most New York anglers can fish most of the lake. Although some places are off limits, this lake is so big you probably won’t even notice.

In addition to its size, this lake is known for being populated by a variety of different species. For example, you can find lake trout, landlocked salmon, perch, pike, walleye and smelt. You can also find brown trout, muskellunge, panfish and rainbow trout. Of all the lakes on this list, this probably has the largest variety of species available.

A popular fish to catch in this lake is the smelt, which has no daily limit on this lake. Therefore, fishermen have been known to catch dozens of smelt, which are often fried as a delicacy. The smelt travel in a large school on this lake, and the predatory fish are usually not far behind.

There are many different ecosystems in Lake Champlain. You can find smelt and predatory fish, as we mentioned above. However, you can also fish for perch and walleye near the lake banks. Weeds near the shore are often home to panfish, pike and pike.

However, there are some special regulations on this lake. Therefore, we strongly recommend that you read these special rules before deciding to fish there. The sharing of Lake Champlain between two states tends to complicate things a bit.

You can get to the ice through many different marinas and parks around the lake. Much of its surroundings is publicly owned. So finding your way to the ice shouldn’t be a challenge.

Lake Champlain is shared by Vermont and New York and has a variety of different fish species that make ice fishing a popular winter activity.

The fourth lake is located in the Fulton chain of lakes, which may be the cause of its strange name. This lake provides a great home for landlocked trout and salmon, making it a popular spot for anglers interested in these species. The best places to catch these species are sandbars, and there are many sandbars in the lake.

Other species may roam deeper waters. If you venture a little further, you can find salmon, perch and rainbow trout. You can load your tips with up to five fish to catch these species.

The village of Inlet has a public launch, which allows easy access to the lake. 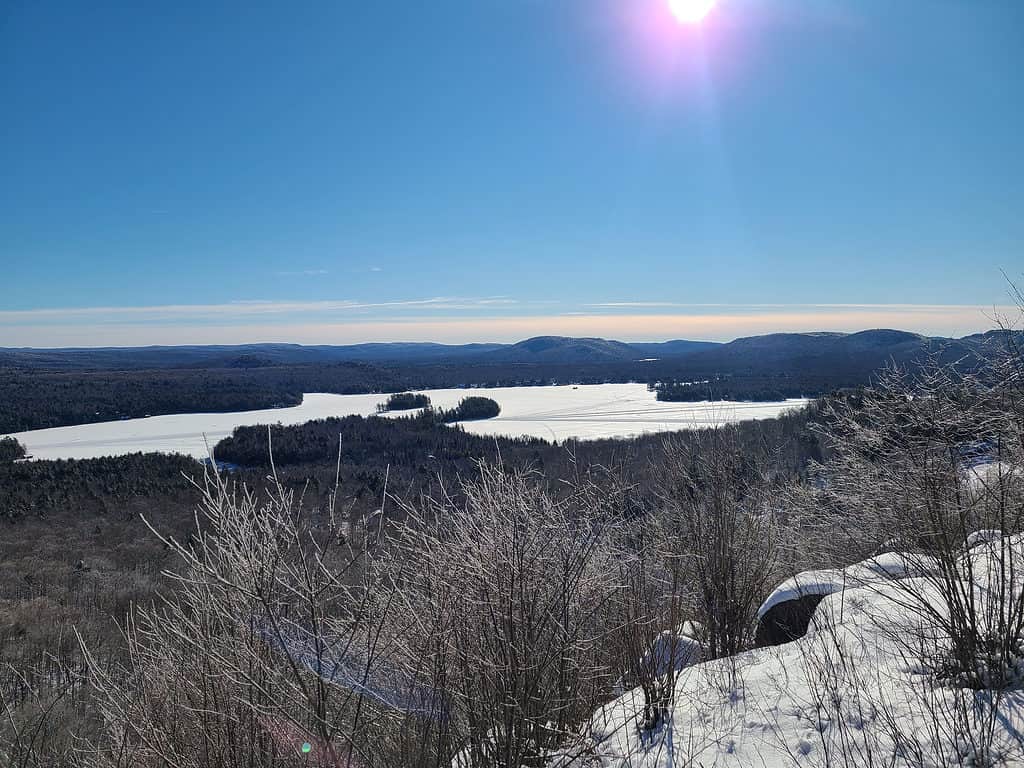 Fourth Lake is one of eight lakes in the Fulton Chain of Lakes located in the Adirondack Park in New York State.

Oneida Lake is popular for fishing any time of year. You’ll find plenty of anglers on the ice (and on the lake during other seasons, too). So, while this lake is popular for a reason, it’s not the best for those looking for solitude.

Most of the fish are being caught around bars, drop-offs and shoals. There are many different species in this lake, but the lakes are usually the most sought after. However, this species has been overexploited to some extent.

You can also find perch and belly fish in decent numbers. Therefore, this lake could also be recommended for those looking for these species.

As a popular lake, access is simple. There are many different marinas and similar locations that allow direct access to the ice. 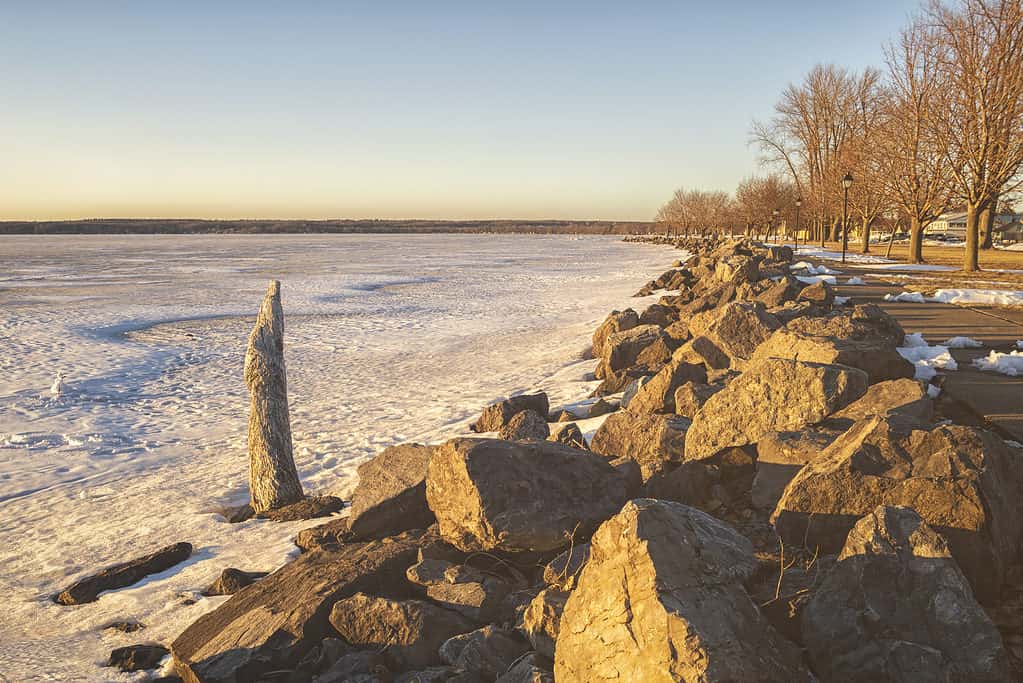 Oneida Lake is popular for fishing any time of the year, as it is a well-known place for catching walleye.

Honeoye Lake is one of the shallower lakes on this list. Therefore, it is home to many herbs. This environment supports a thriving population of bluegill, perch and walleye. Additionally, recent local efforts have further increased the walleye population. However, this has led to some additional regulations. So be sure to check before you head to the ice.

Mostly, anglers go to the weed lines, where perch and walleye can be caught. There are also hand-sized bluegills, which are just as popular.

In all, this lake is about five miles long. There are several launch sites where you can access the lake, so access is usually not an issue. 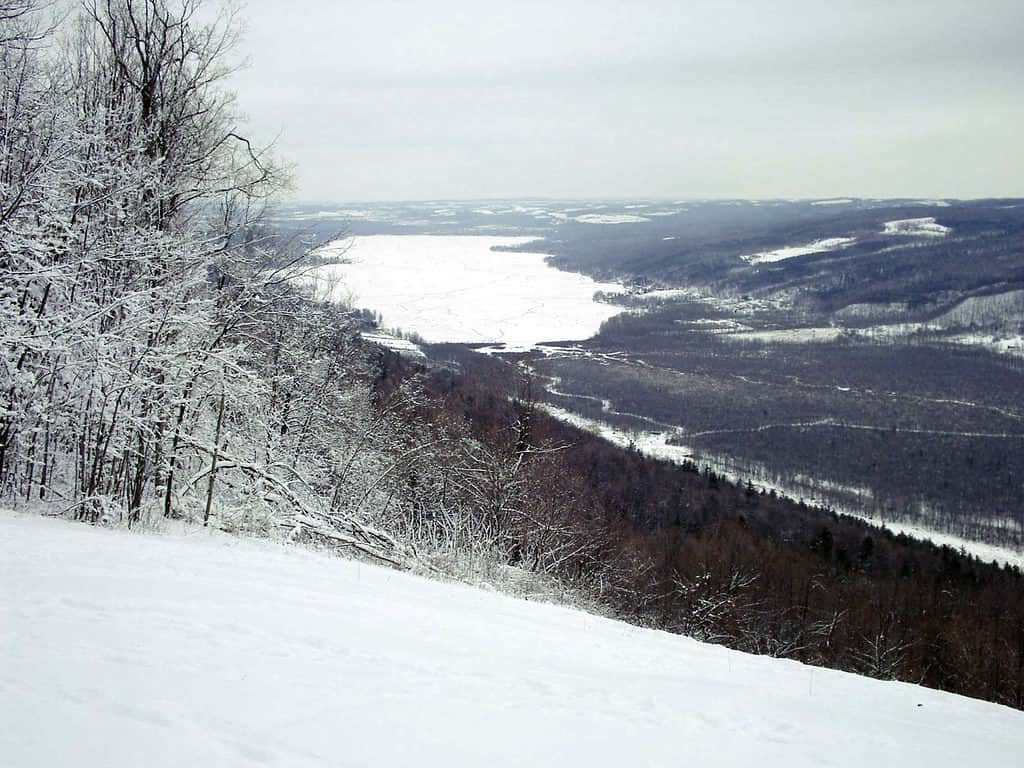 Honeoye Lake is one of New York’s Finger Lakes, a popular fishing spot for walleye and walleye.

You can easily access Lake Erie via Sturgeon Point. At this point, there is fairly easy access to the public. In this area you can find many perches, as well as some that are more liumat.

Lake Erie fishing can be quite productive. However, you have to walk a couple of miles offshore to the correct depths to find the perch. So you usually need to bring a snowmobile or something similar.

This area is a bit more dangerous than other areas, though. For example, the ice can be treacherous due to the river currents in the area. Therefore, large pieces of ice can break and move. We recommend using extreme caution and keeping up to date with ice conditions. 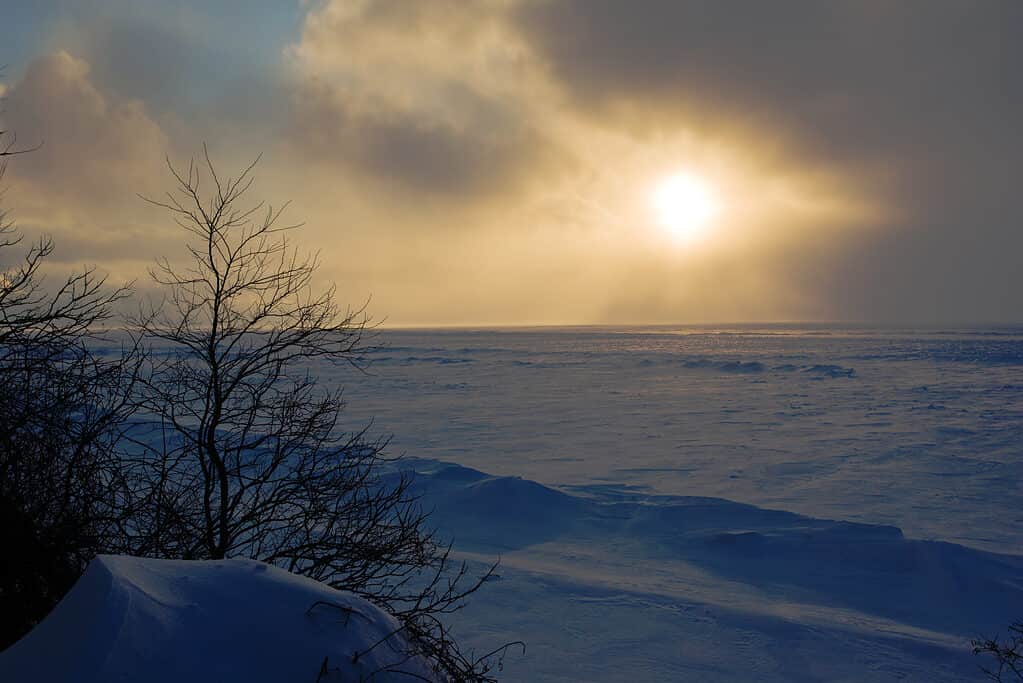 Lake Erie offers ice fishing opportunities for perch, but anglers will have to travel a couple of miles offshore to get there.

Saratoga Lake can be a great option. However, many anglers report it as a mixed bag. There are many shallow areas with weeds, making it a good choice for crappies, bluegills and pike. However, if you head to the deeper areas, you can find perch and walleye.

You can find easy access south of the lake in Saratoga Springs. There are many different roads along the west coast. There are also several boat launches, allowing easy access to the ice.

This river is quite large and works well for ice fishing. In fact, it’s one of the most popular ice fishing spots in the state. The whole river is shallow and weedy. So there’s virtually no current, either. Sunfish, minnows and bluegills love this environment, so this place is great if that’s what you’re looking for.

However, because this area is so popular, it tends to be extremely crowded. Therefore, you should expect a lot of company while fishing. However, this means that you may be able to find previously used holes without having to drill your own.

Fishing here is a winter tradition for many families. However, fishermen have declined in previous years. 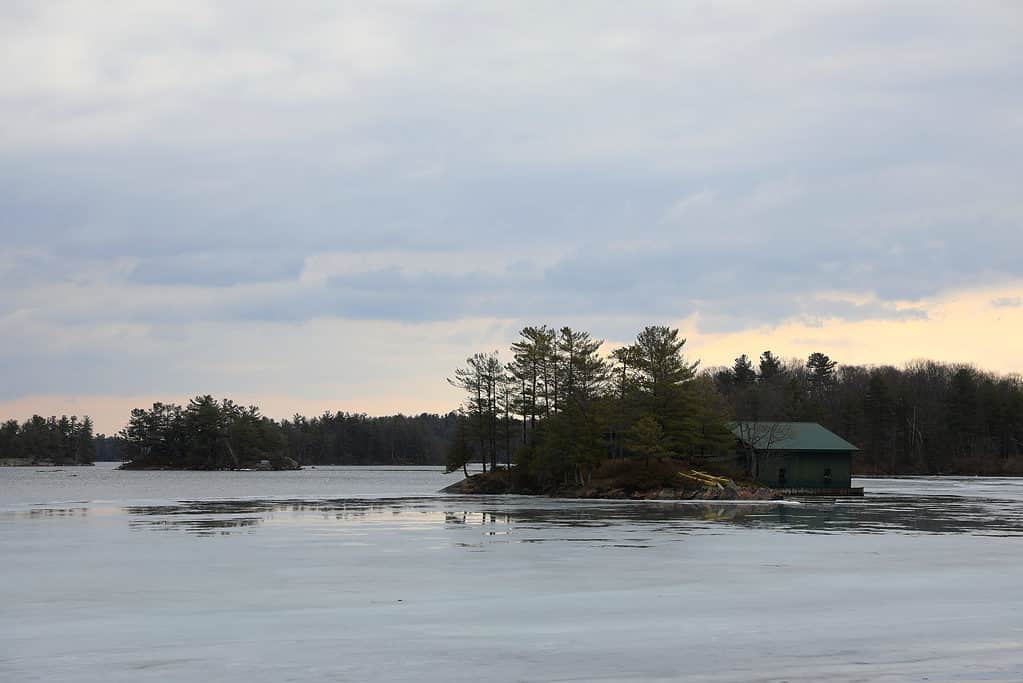 The St. Lawrence River is one of New York State’s most popular ice fishing spots.

Cayuga Lake is extremely deep at about 400 feet deep in most areas. Therefore, these areas never freeze. However, there are several miles of the lake on the north end where the water is less than 15 feet deep. There is a lot of weeds and debris in this area, making it an ideal environment for perch and panfish.

There is a navigation channel in the middle of this shallow area. Most of the fish tend to stay in this area, making it a perfect place to fish. However, bluegills are usually along the weedy edge of the lake.

This lake is a very popular ice fishing spot in the area. It’s on pretty much every ice fishing list out there. Roosters are one of the most popular species in this area. There is a lot of deep water and a lot of environmental diversity. Therefore, you can also find many other fish in the area.

There are several access points up and down the lake. So finding a way to the ice is usually not a problem. However, you should be prepared for a lot of company. This area is one of the most popular for a reason.