DA NANG, Vietnam – Industrial-scale fishermen will no longer be able to use two types of shark gear in the western and central Pacific Ocean after the international body in charge of tuna fisheries there agreed to ban the devices.

The move, adopted last week at the annual meeting of the Western and Central Pacific Fisheries Commission (WCPFC), is seen as a major and potentially precedent-setting victory for conservationists who say urgent action is needed to prevent the extinction of many shark populations. Shark numbers in the open ocean are estimated to have plummeted by 71% over the past half century, and humans kill 100 million of the animals each year.

“The science was on our side,” Kelly Kryc, head of the U.S. delegation to the WCPFC, which co-proposed the measure with Canada, said in an interview after the meeting concluded. “By taking these steps, conservation gains are quantifiable and measurable for vulnerable shark populations such as oceanic whitetips and silky sharks.”

The second type, wires, increase the probability of retaining a shark once caught on the line. The animals’ sharp teeth can easily bite into a nylon or monofilament leader (a short segment of line that attaches a hook to the main fishing line) rather than a wire-reinforced leader.

Although both gears were already outlawed in some countries’ territorial waters, last week’s decision marked the first time that one of the main bodies that oversees tuna fishing in international waters has banned them totally use The decision may pave the way for other regional fisheries management organizations, or RFMOs, to follow suit.

The WCPFC previously banned the simultaneous use of wire and shark lines, but vessels could still deploy one or the other. A proposal to ban them was not adopted at last year’s meeting.

The gear ban comes amid a debate over whether tuna RFMOs should have a stronger hand in regulating shark fishing.

Although the WCPFC and its counterparts in the Atlantic, Indian and Eastern Pacific Oceans were created to govern tuna fisheries, some fleets operating under its mandate actually target certain shark species.

Fleets sometimes declare their shark fishing activities. Japan and Taiwan have each submitted a shark management plan to the WCPFC, as required by the body of flag states whose fleets deliberately catch sharks.

Other times, shark hunting is done under different auspices, as in the case, experts say, of Spain.

While the EU does not appear to have submitted a shark management plan to the WCPFC, experts say the catch data strongly suggests that Spanish vessels are targeting sharks rather than simply tossing them by accident, as the called accidental capture.

“Reputationally, it’s not something that necessarily stands out as a shark fishery,” said Rod Cappell, Poseidon’s Director of Aquatic Resource Management. “But you don’t have to scratch too far below the surface to see that these are absolutely targeted fisheries.”

Poseidon, a UK-based consultancy, valued the global trade in blue sharks at $411 million in a recent report it co-authored for the international marine conservation NGO Oceana. Cappell emphasized that while directed shark fishing was not necessarily illegal, it was not widely regulated by RFMOs.

“There’s a bit of a policy vacuum around this,” he said. 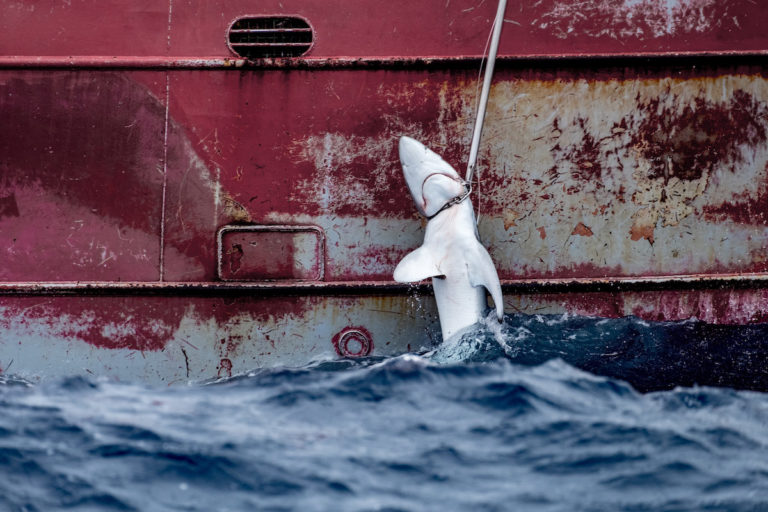 A shark is hauled aboard the Nuevo Zumaya, a Spanish longline targeting swordfish in the southeast Atlantic, in late 2019. Image courtesy of Tommy Trenchard/Greenpeace.

Under the WCPFC’s new gear ban, vessels operating under a shark management plan would still be able to use shark wires and lines, although they would have to get approval from the body’s scientific committee. Vessels targeting “tuna and billfish,” which includes swordfish, would be prohibited from using the gear, sources with knowledge of the measure’s final language told Mongabay.

While the ban on wire leaders in particular will make it harder for boats to target sharks, it won’t stop them from doing so entirely, according to Raúl García Rodríguez, WWF Spain’s senior fisheries officer.

“They say they’re going to lose basically most of the blue shark catch” without wire heads, he said in an interview. “I don’t think that can be the case because the catches of blue sharks were already happening a [an] industrial level before the inclusion of this innovation. But they will probably lose a lot of weight [in terms of their overall blue shark catch].”

WCPFC member states needed until the final hours of the meeting’s closing day on December 3 to reach a consensus on the gear ban, with the EU holding out until the last minute, they confirmed sources with knowledge of the negotiations.

For the EU, the stakes of the WCPFC decision are relatively low: the seven Spanish longliners were the only vessels from the bloc fishing in WCPFC waters in 2021, compared to hundreds of vessels from flag states such as Japan and China. And the gear ban only applies to latitudes between 20 degrees north and 20 degrees south of the equator, meaning Spanish vessels can still use cable pointers in the South Pacific.

But the bigger issue is whether the art of shark fishing will be outlawed in other parts of the global ocean, where some 250 Spanish and Portuguese longliners target blue sharks primarily for their fins and, increasingly, his flesh

“If countries were to accept it here, that should set a precedent for other large RFMOs,” said Kryc, an appointee of US President Joe Biden, who serves as deputy assistant secretary for international fisheries at the National Oceanic and Atmospheric Administration (NOAA). The United States, he added, would “see how much appetite there is” to pursue similar policies elsewhere.

Ordinarily, Rodríguez said, he would not expect the EU to resist marine conservation efforts, a front on which the bloc is usually progressive. Its card system, for example, has helped improve fisheries governance in countries such as Thailand that supply the EU market.

“But as usual, when you attach economic interest,” priorities can change, he said. “And that is valid [to say] for almost every country.”

European Commission press contacts did not respond to a list of questions at press time. 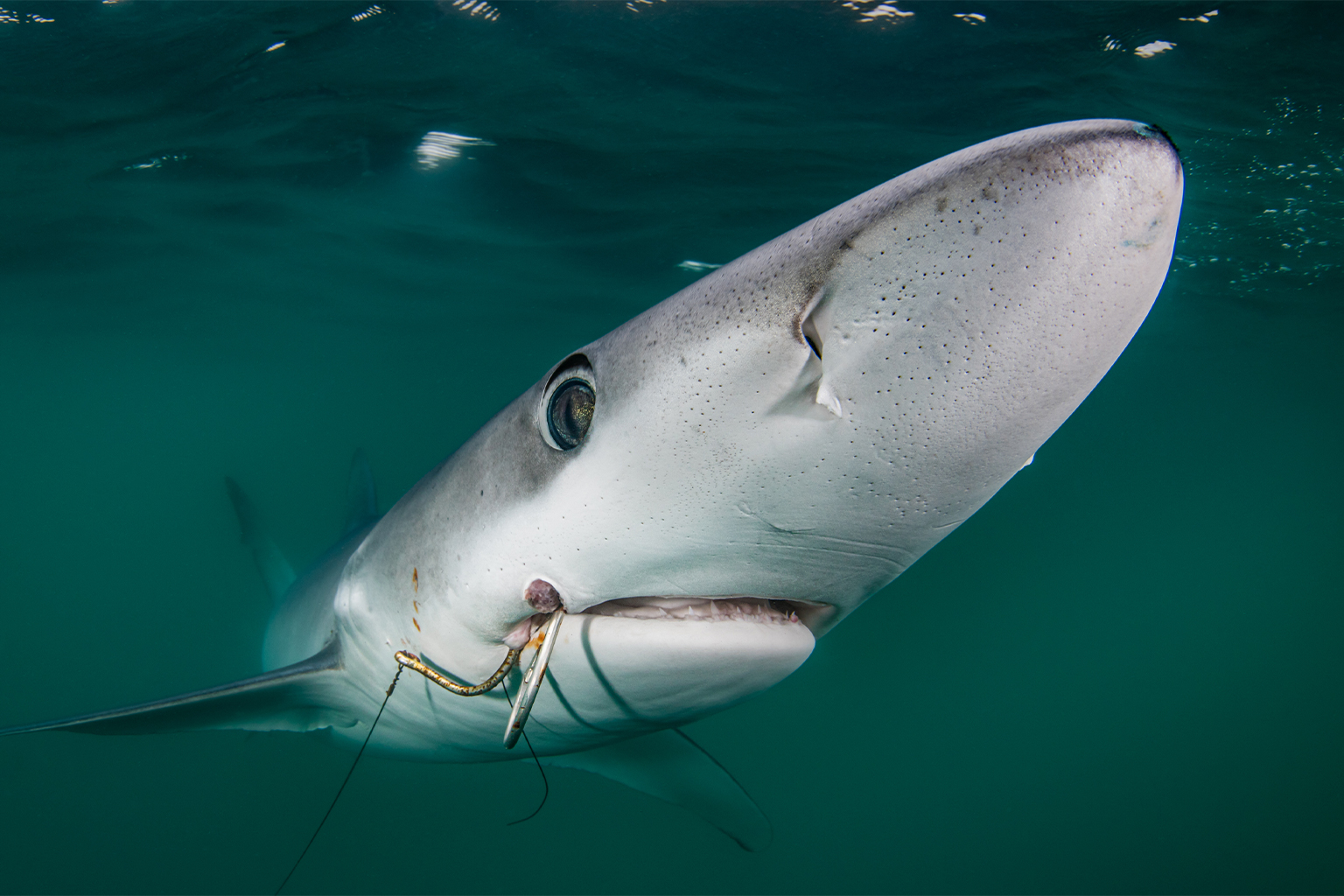 A double hook blue shark. About 250 Spanish and Portuguese longliners in various parts of the world’s oceans target the blue shark primarily for its fins and, increasingly, its meat. Image by Ron Watkins / Ocean Image Bank.

Also in the proposal was a requirement that sharks such as oceanic whitetips, which cannot be retained under any circumstances, be released with as little fishing gear as possible attached to their bodies. However, WCPFC only adopted this survival measure as a guideline, not as a requirement.

And while the final language prohibits ships from using cable pointers, it allows them to keep the devices on board, creating enforcement challenges in an environment where oversight is already lax.

Longliners in the fleet of Dalian Ocean Fishing, a company that has claimed to be the largest supplier of sashimi-grade tuna from China to Japan, for example, spent years running a massive illegal shark fin operation in the waters of the WCPFC, according to a Mongabay investigation published in November.

The company also used the long-banned combination of wire and shark lines to deliberately catch large numbers of sharks, the investigation showed.

The best thing RFMOs can do to improve enforcement, conservationists say, is to increase the percentage of vessels required to have an observer, either human or electronic, on board. Currently, the WCPFC only requires that 5% of fishing effort on board longliners be covered by an observer.

“In addition to having measures that require compliance with certain parameters, you need to make sure that fleets actually meet these requirements,” he added. “And that requires watchdog coverage and enforcement.”

The US unsuccessfully proposed increasing observer coverage of longliners to 20% at last year’s WCPFC meeting. “We would love to see that increase,” Kryc said of the 5 percent requirement.

Overall, the ban on shark wires and lines was a “huge conservation victory,” Kryc said.

“It’s a huge success story, not just for the Pacific, but for what’s possible in the future in other RFMOs.”

Related hearing: Hear this reporter discuss Mongabay’s recent investigation into the illegal targeting of sharks with banned material on our podcast, listen here:

Poseidon (2022). Blue shark: economic assessment of the global market for blue shark products and analysis of interdependent policies for sustainable management and trade. Retrieved from