EXTREME CAUTION IS REQUIRED IN RIRIE AS THE WARM WEATHER AND RAIN THIS WEEK HAS CAUSED PRESSURE BELTS TO DEVELOP AND ICE TO BREAK UP IN PLACES. IT IS EXTREMELY DANGEROUS!

Ririe Reservoir froze earlier than usual, allowing some anglers to begin ice fishing on December 22, four days earlier than it has been in many years. Usually, it’s the first week of January when we can get on it. But kokanee fishermen are always in a hurry, and we were in a hurry to celebrate Christmas with family gatherings on the ice.

But it didn’t really matter when we started kokanee fishing because in the first week of ice fishing, no schools of salmon have been seen without land. Only four kokanee have been reported caught and they were solitary, while trout have been caught consistently. After interviewing 42 ice fishermen, most of the fishermen thought the kokes were hiding in the canyon near the power line crossing.

Last Monday, the ice was five to seven inches thick, and I decided to make the mile and a half hike up the reservoir to fish the narrow canyon. When I drilled my first holes, I found a school of fish about 10 feet below the ice.

“Kokanee” I thought excitedly, bad! Two 15 inch trout were all I got out of the school.

Two 15 inch rainbows caught on Ririe. Rainbows are the most numerous fish caught in Ririe through the ice this year. | Bill Schiess, EastIdahoNews.com

After fishing for a couple of hours, I moved further up the canyon as six anglers drove up in ATVs. They went about a mile upstream to fish where they had had success with kokanee last season. Neither of us tagged any schools of kokanee and when we fished the perch hot spots, we found no schools of perch, just trout ready to play.

In my unofficial interviews with anglers, I encountered a lot of frustration, along with some hearsay from seasoned kokanee and perch anglers. The only positive comment was: “trout fishing is better than it has been for years, if you like them; at least I have an omelette for every can of beer I drink.”

On Tuesday, I called the local regional fisheries director, Brett High, to ask what he thought of the non-existent kokes. He seemed ready for my call because he was also frustrated.

“The kokanee have not done well in this drought,” High said. “In 2020 we planted 262,000 fry which should be the ones we are catching this year. But in June, we only had 29 kokanee per net per night. Most were mature spawners that died during spawning this fall. We only saw a handful of the 2020 and 2022 planters. We think there should be plenty of fish, but the lack of water entering the reservoir and the high water temperatures coming from Willow Creek, they probably didn’t let them survive.” 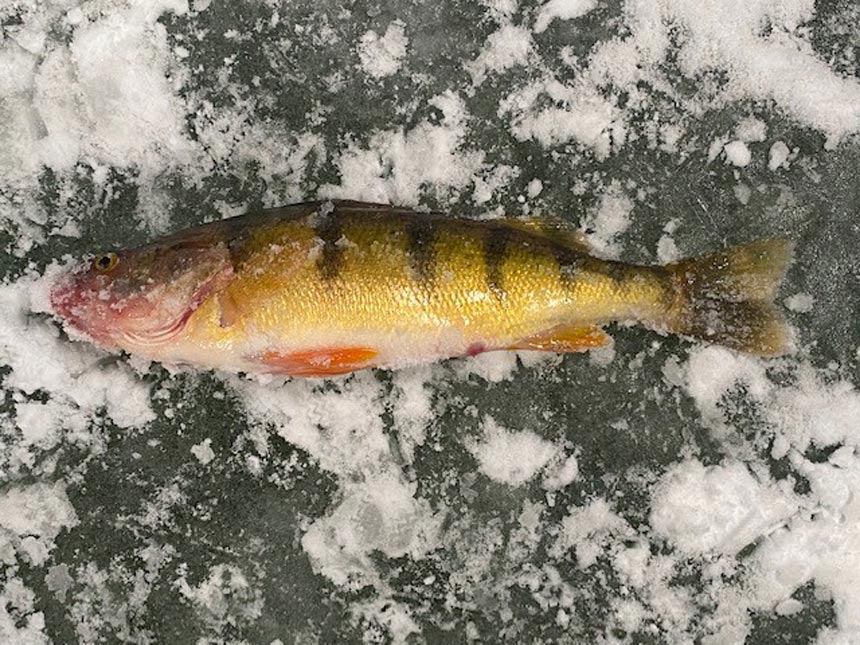 This 11 inch perch caught at Ririe by the author is one of three caught in three days of fishing. | Bill Schiess, EastIdahoNews.com

The long-term average for gillnets shows about 65 kokanee per net per night and perch numbers were also down last June. Tall claims that perch go through a “boom and bust” cycle and that cycle plus water conditions during the drought have also affected the perch population.

“There are a lot of reasons and a lot of bad luck why the kokanee fishing in Ririe will be bad this year. The available stock and drought conditions are just two of them,” High commented. “Ririe’s kokanees are 98% hatch as there are no good spawning streams for them. If you get a couple of kokanees this year it will be something to shout about and I’m just as frustrated as you are.”

The Fish and Game are trying to find out and have several things they are working on that I will write about in a later article.

In the meantime, I will continue to fish there once or twice a week and enjoy the trout fishing. One angler had a 20 inch rainbow last week. There are also some tiger trout and a few perch to catch and I need the practice of pulling my sled across the ice. Who knows, there might be a hidden school of kokanee that you and/or I might stumble upon. I also understand that Mackay Reservoir is producing a few koka in the 11 inch range as well as some very nice rainbows.

Good luck on the cold ones and stay safe, but don’t expect to catch many kokanee from the waters in the area. Have a happy and healthy New Year. 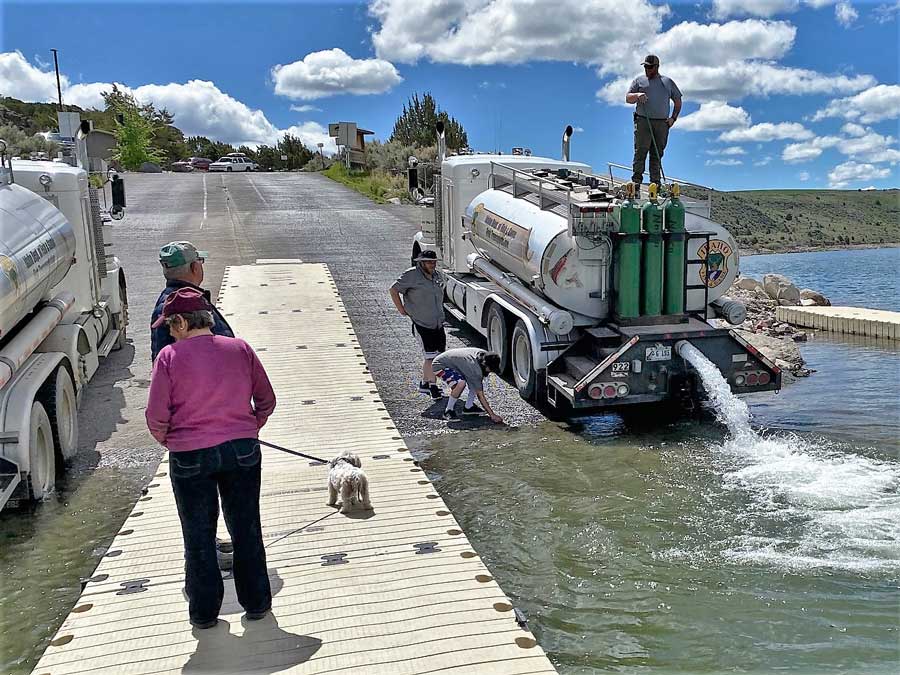 The Idaho Game and Fish Department houses more than 200,000 kokanee fry on June 1. Hopefully, they survive to be big enough to be caught by fishermen in 2024.

The ice is starting to freeze back in upstate New York, which means it's time to get back to ice fishing. Because winter is so inconsistent in New … END_OF_DOCUMENT_TOKEN_TO_BE_REPLACED

A recent slug of rain and a full moon had a funky high tide backed into the marsh northeast of Buras, Louisiana. Captain Davey Miles of Cajun Fishing … END_OF_DOCUMENT_TOKEN_TO_BE_REPLACED

In the far south... It's ice fishing season and people are out on the ice enjoying everything that comes with it. Resorts are hard at work moving … END_OF_DOCUMENT_TOKEN_TO_BE_REPLACED

The golden squid swims back to Mexico. About a quarter of a century since the shiny little fish disappeared from its only natural habitat, the … END_OF_DOCUMENT_TOKEN_TO_BE_REPLACED

The hot dogs and hot chocolate are always a hit, but the bluegill, crappie and free fishing gear make up the main event. The goal is to introduce a … END_OF_DOCUMENT_TOKEN_TO_BE_REPLACED

What is a fishing reel? The common question you've heard from people who have never used one; they can be a little intimidating. The thought of … END_OF_DOCUMENT_TOKEN_TO_BE_REPLACED

A fisherman who thought it was a good idea to tease a saltwater crocodile was surprised when the reptile pounced on him, almost knocking him into the … END_OF_DOCUMENT_TOKEN_TO_BE_REPLACED

The National Defense Authorization Act for Fiscal Year 2023, recently signed by US President Joe Biden, will authorize the US Army Corps of Engineers … END_OF_DOCUMENT_TOKEN_TO_BE_REPLACED

1. At Big Pier 60 in Clearwater, Spanish mackerel have been caught almost every day since the storm. A few redfish, lings and whiting too. Sheepshead … END_OF_DOCUMENT_TOKEN_TO_BE_REPLACED

YARMOUTH, Maine - An anonymous donation has helped take nearly 1,000 acres of Maine wetlands off the market, in an effort to better prepare coastal … END_OF_DOCUMENT_TOKEN_TO_BE_REPLACED

Montana Fish, Wildlife & Parks is studying about 3,800 acres of grasslands and brush in the northwest foothills of the Big Snowy Mountains for a … END_OF_DOCUMENT_TOKEN_TO_BE_REPLACED

Fish are a diverse group of aquatic organisms that generally have a backbone and a head. Specialized gills, which are holes in the skin, allow them to … END_OF_DOCUMENT_TOKEN_TO_BE_REPLACED

Watch the terrifying moment a fisherman is almost dragged into the river by a furious saltwater crocodile after he was taunted with a bait. … END_OF_DOCUMENT_TOKEN_TO_BE_REPLACED 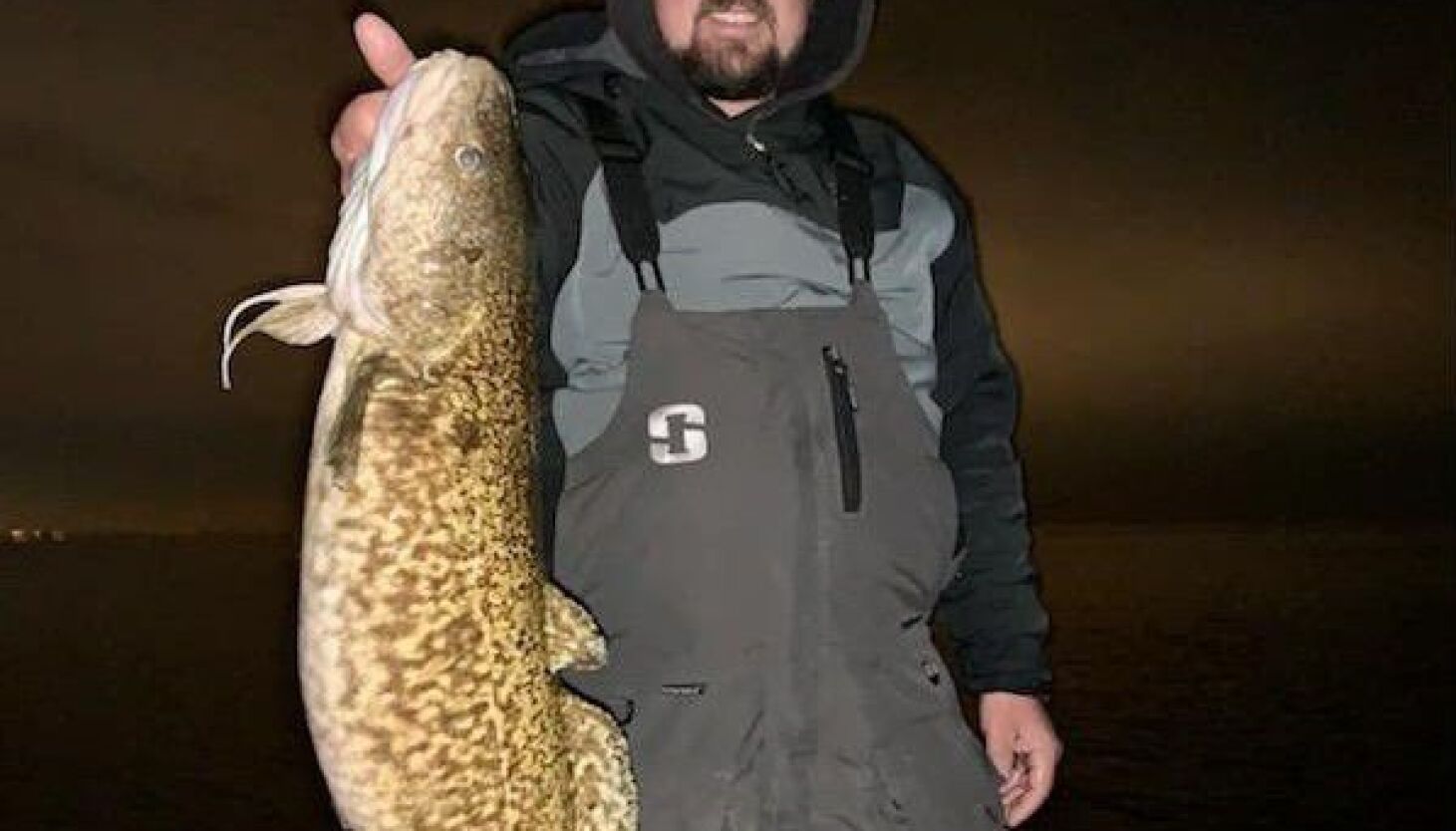 Notes come from all over Chicago and beyond.BIG NUMBER11.4: Indiana record walleye, caught Jan. 10 by Phillip Duracz, who also holds the Indiana … END_OF_DOCUMENT_TOKEN_TO_BE_REPLACED

Ice conditions can vary from lake to lake, but the fish are still biting in Grand County.Fishing with Bernie/Courtesy photo Great Lake: Ice … END_OF_DOCUMENT_TOKEN_TO_BE_REPLACED

Minnesota angler Jim Dresch's dream of making a big impact in the fishing industry has taken a major step toward becoming a reality. Dresch, … END_OF_DOCUMENT_TOKEN_TO_BE_REPLACED