(WJET/WFXP/YourErie.com) — This winter has been a wild ride. Temperatures towards the end of December (which marked the beginning of winter, according to the calendars) dropped dramatically to highs in the negative digits. That froze pipes in homes and businesses. He raised the electricity bills. It was enough to freeze over the streams.

That cold now seems a lifetime ago to some, and temperatures swung wildly to unexpected highs. The snow melted. Since then, what little snow has fallen has mostly melted away. The rivers have thawed and are flowing freely again. But guess what didn’t happen? Presque Isle Bay has not yet frozen over, and this has completely prevented the ice fishing season.

“The streams are usually frozen, and they were during those negative times, when that happens the only option becomes ice fishing, but nobody is ice fishing right now,” said Anthony Campanella, owner of Poor Richards Bait and Tackle in Fairview.

Fortunately for anglers, streams continue to flow freely and steelhead are plentiful. Along the banks of a local creek known for steelhead fishing, Michael Kulak of Eglon, West Virginia, was packing up his gear late on the morning of January 11th. Three fish stood on a string, occasionally kicking its tail.

“This is my first time here,” Kulak said. “Going to New York, you pass through here, and I’ve always wanted to fish here and never did until this year.”

Kulak estimated that the fish on his string weighed between 7 and 8 pounds each. He was not the only fisherman in the stream. There were spaces left in the parking lot, but it looked busy for a Wednesday.

“I came on Wednesday due to lack of people. I hear towards the weekend it’s crazy,” Kulak said.

He had been fly fishing on January 11th. Kulak has been a fly fisherman for more than 12 years, but he grew up fishing. These days, he chases steelhead when he can.

“It’s the biggest fish you can catch (off West Virginia), and I think they’re very beautiful,” Kulak said. “I will never go back to New York for steelhead compared to this place. It has very good quality fish management.”

This matches the sentiment of Poor Richards experts. Campanella said several of her regular customers have reported having their “best day” in the past week. 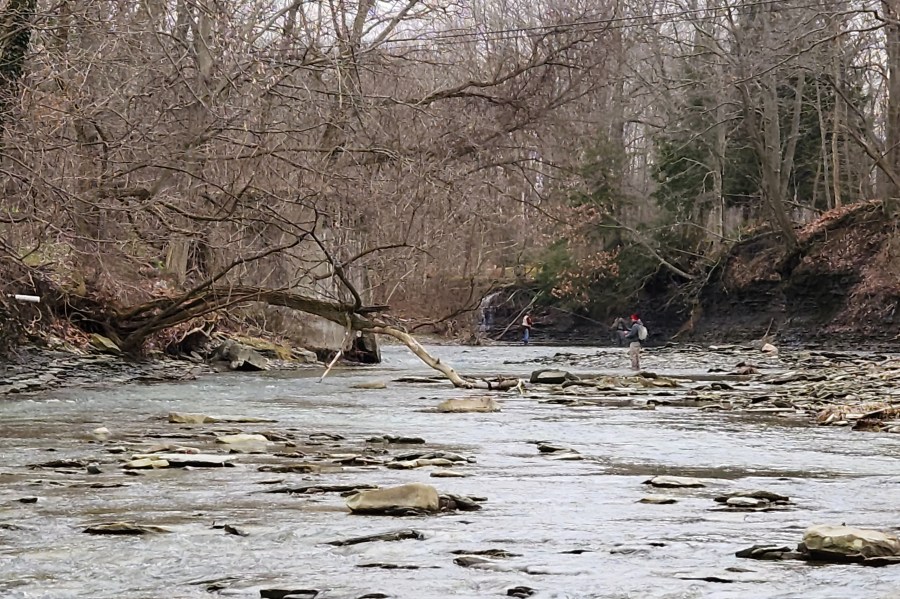 “This year, the steelhead in general are bigger, and it may be the best year in terms of numbers,” he said. “The stars align sometimes and you get those perfect conditions, but I also have to credit the stocking programs through 3C.U. and the Pennsylvania Fish and Boat Commission hatchery. Without them we wouldn’t have the numbers that we have”.

Catching steelhead requires two things: the right equipment and patience. At the creek on January 11, overcast skies made the bare trees a tapestry of gray on gray. The stream was a clear streak of color in the otherwise silent landscape. A waterfall fell into the creek not far upstream from the parking area.

The riffles, pools, runs, holes, seams were pretty clear water, not great for fishing. The time of day was midday and slowly getting on, not great for fishing either. Still five fishermen wade in the stream casting and waiting for a tug. If they left without fish on a string, at least they had the scenery.