YPSILANTI, MI — Freshwater jellyfish seem to be popping up around Michigan, prompting questions about the aquatic animal most people thought could only be found in the ocean.

A class of Eastern Michigan University students is spending their first semester tracking these freshwater jellyfish through a biology elective led by Professor Cara Shillington.

The group collected 25 to 30 freshwater jellyfish through field research in a lake in Dexter Township recently. Shillington said the creatures appear to be relatively new to the lake, according to locals.

“One of the (reasons) I really wanted to get the students out (doing field research is for them) to actually see these organisms and see them interact and function in their environment,” Shillington said. “Seeing them in their natural environment is wonderful.”

The 17 students spent time snorkeling, collecting and observing these jellyfish not only to discover more about the creature, but also to educate others. As the semester draws to a close, Shillington and her students are ready to share what they’ve learned so far.

Where did these jellyfish come from?

Although some people have never heard of freshwater jellyfish, the invertebrates, also known as Craspedacusta sowerbyi, have a long history in the US and Michigan.

Jellyfish have been in Michigan since 1933 when they were found in the Huron River near Ann Arbor, according to information compiled by the Great Lakes Non-Native Aquatic Species Information System.

Since then, these aquatic animals have been found in various bodies of water on both peninsulas, as well as in other nearby states such as Ohio, Wisconsin, Minnesota, and Pennsylvania.

Researchers believe these jellyfish originated in the Yangtze River Valley in China and were transported with ornamental aquatic plants. Jellyfish are thought to be moved between bodies of water by birds, feeding fish or other aquatic plants.

What is known about freshwater jellyfish so far?

Peard often finds quarter-sized adult jellyfish in still waters such as lakes and ponds from mid-to-late June through late October.

“Particularly in a small body of water, once (these freshwater jellyfish) get in, they’re pretty much established,” he said. “Maybe you don’t see them every year just because you’re not in the right place at the right time.”

Like Peard, Shillington’s students often looked for the clear jellyfish on sunny days in the quiet lake water.

The class would find jellyfish ranging from the size of a dime to a nickel, EMU senior Sarah Dubinsky said. The students would collect these jellyfish and bring them back for observation where they survived for about a week to a week and a half.

“When we were out there, it was a long shot (and) it was never guaranteed that we would find one once we started swimming because they were pretty hard to see, even if they were right in front of you,” Dubinsky said.

Students measure conditions such as water darkness, water temperature, and other factors to learn more about the animal and its environment.

The collected jellyfish were never near shore, which may be one reason many people don’t notice them, Shillington said. Peard added that a jellyfish’s stage in its life cycle can also interfere with other people seeing it. 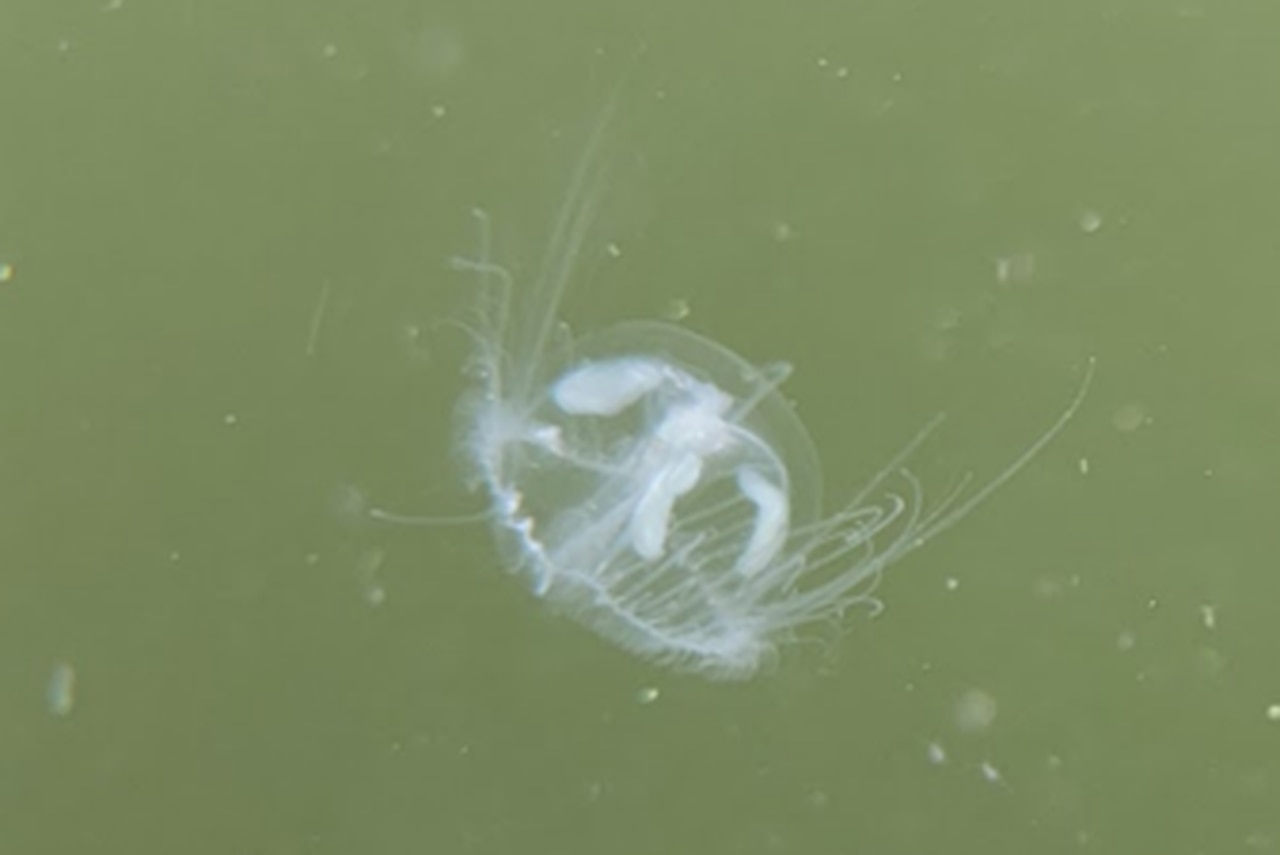 A close-up view of a freshwater jellyfish that Eastern Michigan University students were researching.

Are these jellyfish harmful?

Both Peard and Shillington agree that these jellyfish are not afraid of anything. Although the animal has stinging cells on its tentacles, these cells are not powerful enough to sting a person.

Instead, these stingers are used to paralyze tiny organisms, Peard said, adding that these jellyfish are “passive feeders” that propel themselves through the water and eat anything that comes close, such as zooplankton.

While some may classify these jellyfish as invasive species, Shillington said he considers them non-native.

“Noxious is generally what I think of when I think of invasive, something that is undesirable that tends to spread very quickly,” he said. “Whereas non-native, to me, is just something that’s been brought in, but it’s been around for a long time and it hasn’t necessarily been proven to be harmful.”

So far, Shillington said he hasn’t found any research to suggest these animals are harmful to the environment, but stressed he wants to prove that with future EMU research. Peard agrees with her.

“I don’t think given their size in a large body of water that there is any kind of threat or competition,” he said. “I don’t think they were a competitor for food with other animals.”

The future of jellyfish research at the EMU

This is just the beginning for the EMU class, Shillington said, adding that he plans to continue the course in the future. He said students will even be able to take the class more than once so they can spend more time researching freshwater jellyfish.

Since this is Shillington’s first time teaching the course, he said there are a few things he wants to tweak for next semester, including when students start collecting their jellyfish. Some of his students, like Dubinsky, agree.

Some students in the class also hope the course will receive additional funding to help not only keep the jellyfish alive longer, but to track more information for research.

Ultimately, Shillington said she wants her class to educate others about freshwater jellyfish, as there are still many people who don’t know about the species.

Currently, he said his students plan to teach others about the jellyfish with presentations, brochures, a map to track sightings and with QR codes to document where these jellyfish are found in the state.