The next time you cross the Oregon Inlet Bridge, look down and toward the sound. Anyone kayak fishing with a fly rod? If so, Captain Harry Meraklis is likely to be nearby, directing them and showing them where and how to launch.

Meraklis is a 100% fly fisherman and has been guiding other fly fishermen on the Outer Banks for 11 years.

He grew up in the Pittsburgh area. “I actually tied flies when I was about 12 years old in our basement in Pittsburgh, PA. My dad Sam would wake me up at 4 a.m. on the weekends and we’d be outside. Mostly we’d be fishing from his boat on the top of his paint van.”

Mr. Sam has been gone for a long time, “…but if he knew, and I hope he does, that I was a fly fishing guide in Oregon Inlet, he would light up with a smile.”

Later, Meraklis met another friend who influenced him quite a bit.

“My friend Don Beideman reignited my passion for fly fishing streams in central PA later in life, and I haven’t picked up a spinning rod in a long time,” Meraklis said.

Although he grew up in western Pennsylvania, saltwater fishing has been Meraklis’ passion for a long time.

“My dad started taking our family to the Outer Banks in 1960. We would wade the Oregon Inlet and surf fish,” Meraklis said. 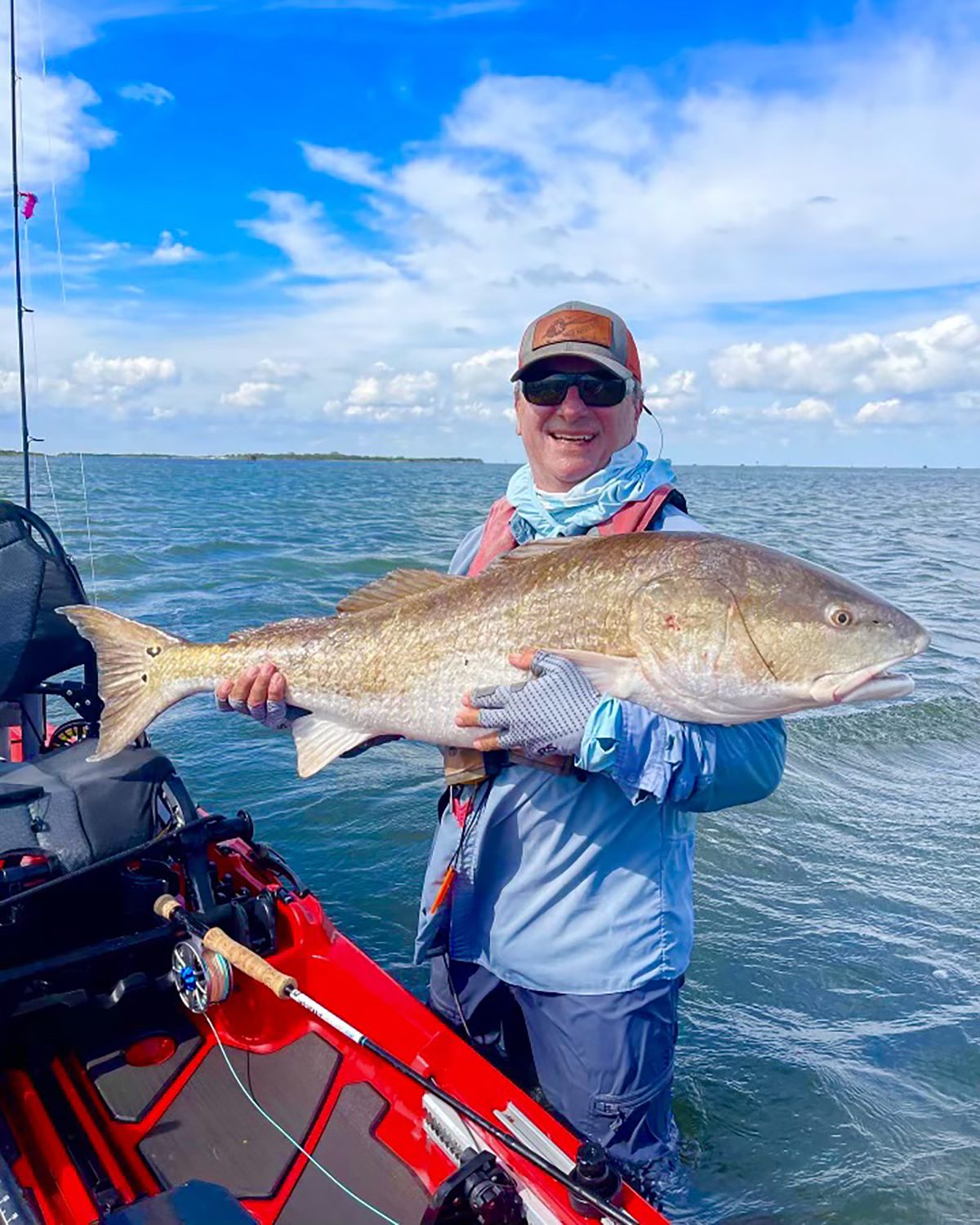 If you do it right, amazing things can happen. Photo: contributed

He couldn’t stay away and later bought a house in Kitty Hawk, where he would eventually move full time.

“I’ve been a homeowner and frequent visitor to the Outer Banks for most of my life and have lived in Kitty Hawk for over a decade,” said Meraklis, who added that he had been guiding ever since . “I work for OBX On The Fly, a fly shop and outfitter located in Manteo, and I am a guide and fly instructor. I mainly fish out of kayaks.”

Meraklis will typically launch from the Oregon Inlet Fishing Center and uses motorized kayaks to find a shopping list of easily accessible spots.

“Electric motors extend our range and get us from one point to another quickly,” he noted.

“I love hunting the flats with a fly rod,” he said.

Meraklis offered a couple of tips for those looking to try fly fishing from a kayak.

“A stripping basket can be the ticket when drift fishing in a kayak. We often have strong winds that can wreak havoc with your line management by blowing them into the water and tangling,” he said .

As anyone who has done it can tell you, getting a knot in your fly line when you finally see your prize swimming in front of you can make you say things that would greatly disappoint your grandmother. He added that if you don’t have a detritus basket, “A wet towel placed on the floor of the kayak at your feet can also be quite effective in reducing messes.”

Windy conditions on the Outer Banks can be a challenge for those used to fly fishing small creeks, but there are tricks to help an angler who isn’t used to windy conditions.

“A water load cast is when you place the fly line in the water and use that tension to flex the rod. This prevents the wind from blowing your line all over the place and can be a quick and effective way to deliver your fly.”

Keeping the line tight on the fly is essential to detecting strikes and setting the hook.

“It’s very important to keep the rod tip down and pointed in the direction of the fly to increase the chances of a good hook set and catch more fish,” Meraklis advised.

Another tip from Meraklis for those who’ve never fly-fished in saltwater before: “Practice your cast before you leave here! The longer you can cast, the more water you can cover, which means the more time is your fly in the water.”

Meraklis has even devised his own fly. “I created the Dirty Harry about a decade ago and haven’t used anything but that fly since. It mimics any of the local lures just by varying the color and how it’s fished,” he said.

Drag it along the bottom to mimic a crab, move it quickly through the water when fish are on the menu, and when shrimp are on the menu, a twitch pause retrieve will do the trick. These flies are sold at the Manteo Fly Shop and Harry donates $1 from each sale to the North Carolina Coastal Federation’s Adopt an Oyster program.

Meraklis offers one last piece of advice for light tackle anglers in his exceptionally busy area. 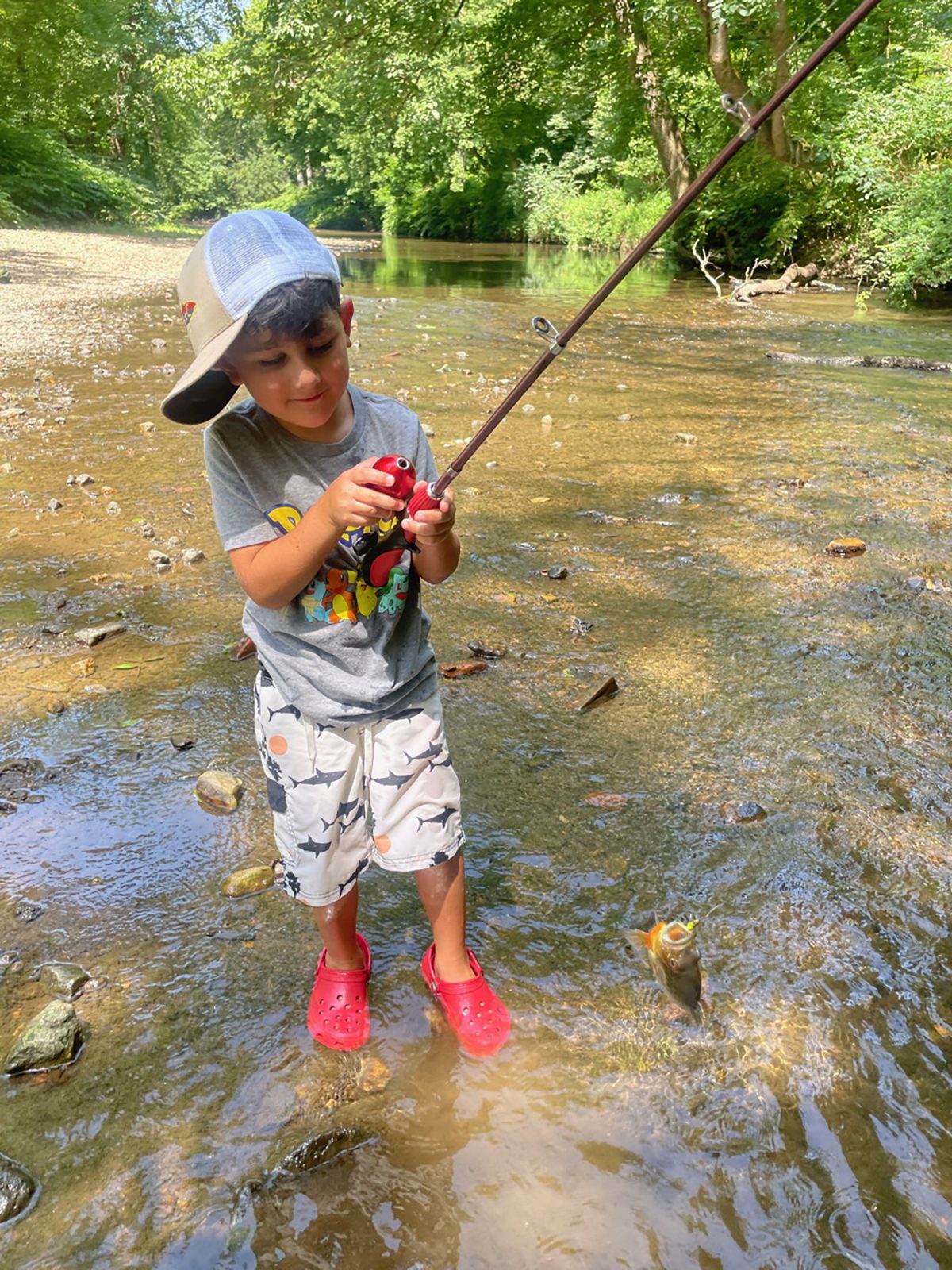 Harry Meraklis’ grandson, Sammy, lives near Philadelphia and loves to fish with his “Papou”. Photo: contributed

“In Oregon Inlet, avoiding pressure from the boat and kayak is key. There’s no point in finding fish, only getting them closed by inexperienced or inconsiderate anglers,” he advised.

And a tip that can help you keep in mind no matter where or how you fish: “Picking the right time on any given day, along with a tide that has good current flow, is key. As a wade angler, stealthily flat hunting and committing to a good flat can pay off big.”

Sharing these nuggets of wisdom is a family tradition. Just as Meraklis’ father did, he has passed that love on to his children and grandson. When you teach them well, they will receive love themselves.

“My grandson can’t wait for her to visit so he can go fishing with ‘PaPou,'” Meraklis said proudly of Sammy, who lives near Philadelphia. “The kid has mad skills for a 5-year-old. He has his own Trout Unlimited tackle bag full of goodies and loves selecting his next lure or fly.