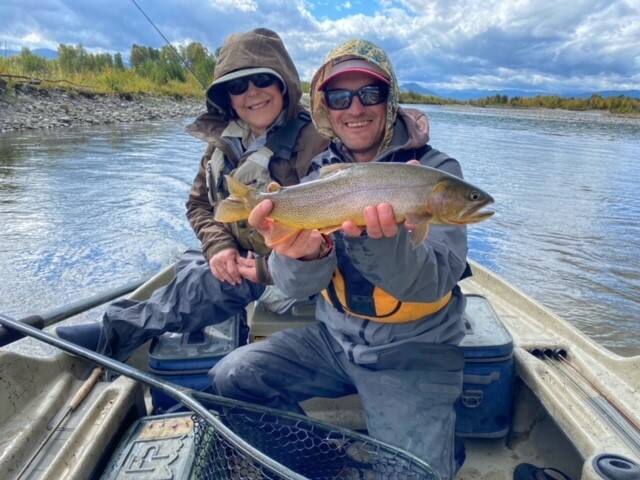 The best part of most of my fishing trips is in my head: checking rivers and fishing centers online, reading customer reviews, and talking to potential guides. My optimism rises and I fall asleep some nights thinking about how great it will be once I get there.

Whether or not the actual destination lives up to all the hype I gave it in my imagination, it’s all part of the experience, and if you do it right, getting there can be part of the enjoyment.

Driving to the fly fishing meccas of Montana, Idaho, and Wyoming, for example, can be a hassle, especially if you’re trying to do it in one day, but we’ve learned to take our time, plan at least one overnight stop halfway through way and download several interesting novels from Audible.com to entertain us along the way.

You don’t see much on Interstate 80 between Reno and Wells, Nevada, for example, so a captivating Harry Bosch story by Michael Connelly keeps us awake and entertained. But, we’ve learned to add a stop in Elko or Twin Falls, Idaho, just to break up the trip. We actually found some pretty good places to dine in these cities.

We’ve added the Idaho Potato Museum in Blackfoot, Idaho as a stop on our latest fishing adventure. We had seen signs for the museum on previous trips, but never took the time to stop. This time we did it and enjoyed it.

Not only did we learn a lot about the history of the potato and why it became so important in Idaho, but we all learned that there is a Sonoma connection. The Russet potato that is the most common and popular variety today is actually the ‘Burbank Russet Potato’, developed by Sonoma County’s own Luther Burbank in 1872 when he planted 23 seeds from an Early Rose parent pant. All produced tubers, but one was superior in yield and size. And the rest is history.

We absorbed lots of other fun facts about potatoes and then enjoyed lunch, baked potatoes with all the trimmings, in the museum cafeteria.

Later on in our fishing meander, after spending a few days fishing the Henry’s Fork River in Idaho, we decided to take a trip through Yellowstone National Park, en route to Jackson Hole, where we planned to fish the famous river Snake.

It has been many years since I visited Yellowstone and I had forgotten how huge and spread out it is. We weren’t too far from the West Yellowstone entrance when we saw that all traffic on the road had stopped.

We sat there in our car for 15-20 minutes, assuming there was some kind of accident ahead. Then the reason for the delay became apparent: a small herd of bison was passing the stopped cars and moving toward us, occasionally pausing too much in the grass by the side of the road. They passed so close to the side of Dottie’s car, she could have reached out and touched them.

Of course, the geysers were in great shape, and since Dottie had never seen one before, we pulled into the Old Faithful Geyser parking lot and joined several thousand other tourists to watch the steaming fountain erupt in the sky almost as regularly as clockwork.

Further south, our journey took us through the stunning Tetons and into Jackson, where we had a lovely stay and enjoyed several excellent dinners. The fishing on the Snake River lived up to our expectations and we would happily return for that reason alone. But I have to honestly say that getting there was half the fun.

When I was younger and drowning worms or throwing baits, the freshwater fishing season was usually from mid-April to mid-October. Some western … END_OF_DOCUMENT_TOKEN_TO_BE_REPLACED

More people will be able to expand their connections and understanding of the outdoors in Camden through a major urban conservation, recreation and … END_OF_DOCUMENT_TOKEN_TO_BE_REPLACED

What makes some fish wildly popular, while others fall completely off the radar? Tackle sales are part of it. Bass are in the forefront of angling … END_OF_DOCUMENT_TOKEN_TO_BE_REPLACED

Beaver Lake Bass are biting, but scattered in the southern half of the lake. Reese Jones at Hook, Line and Sinker in Rogers recommends fishing … END_OF_DOCUMENT_TOKEN_TO_BE_REPLACED

At its most recent quarterly meeting in November, the Wildlife Conservation Board (WCB) approved approximately $24.46 million in grants to help … END_OF_DOCUMENT_TOKEN_TO_BE_REPLACED

When people use freshwater beyond a physically sustainable rate, it causes a cascade of impacts on ecosystems, people and the planet. These impacts … END_OF_DOCUMENT_TOKEN_TO_BE_REPLACED

CLEVELAND, Ohio - Jim Holton, 71, of Millford, Michigan might have a lot to be thankful for Sunday afternoon. Both the Lake Erie Fall Brawl and … END_OF_DOCUMENT_TOKEN_TO_BE_REPLACED

YPSILANTI, MI -- Freshwater jellyfish seem to be popping up around Michigan, prompting questions about the aquatic animal most people thought could … END_OF_DOCUMENT_TOKEN_TO_BE_REPLACED

Fly fishing is a year-round activity. Even during the coldest months of the year you can find fish actively feeding, and you don't have to run to the … END_OF_DOCUMENT_TOKEN_TO_BE_REPLACED

The 2022-23 USACE Garrison Project Winter Access Policy for Lake Sakakawea and Lake Audubon is now available. This year there will be 107 areas/entry … END_OF_DOCUMENT_TOKEN_TO_BE_REPLACED

In the southern end... Ice is forming, but apart from a few back bays, it's not ready yet. Mother Nature is on her way. Some resorts are making the … END_OF_DOCUMENT_TOKEN_TO_BE_REPLACED

Manitoba Natural Resources and Northern Development reports that conservation officers, through a variety of enforcement activities, have fined … END_OF_DOCUMENT_TOKEN_TO_BE_REPLACED

It wasn't many winters ago that Robby Richardson ventured out to Antero Reservoir, one of his favorite ice fishing spots, and didn't see … END_OF_DOCUMENT_TOKEN_TO_BE_REPLACED

As the march of technology continues to advance, not only have humans benefited from its advancement, but researchers are finding ways to use new … END_OF_DOCUMENT_TOKEN_TO_BE_REPLACED

Euronymph tactics have become popular among fly anglers for several reasons. The patterns are easy to tie, rigging and casting are simple, and most … END_OF_DOCUMENT_TOKEN_TO_BE_REPLACED