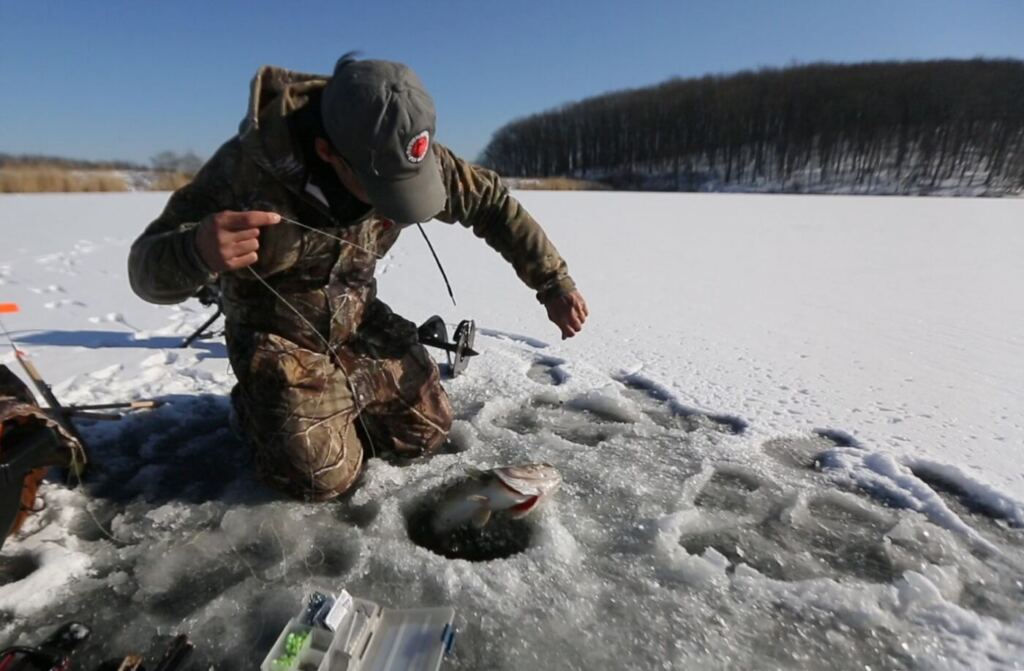 A largemouth bass coils under the ice of Round Valley Reservoir in Clinton. Photo courtesy of NJ Advance Media

Winter officially arrived on December 21st, but once New Jersey’s waters freeze over, ice fishing veterans and novices head to their favorite lakes and ponds to partake in a pastime they love.

And the state has a lot of great places. Ice fishing can be enjoyed at several locations in northern New Jersey, as well as some in southern New Jersey, as long as (of course) safety precautions are taken before, during and after your day on the ice. The ice fishing season can last from after Christmas until March, and can be enjoyed both day and night, depending on weather conditions. 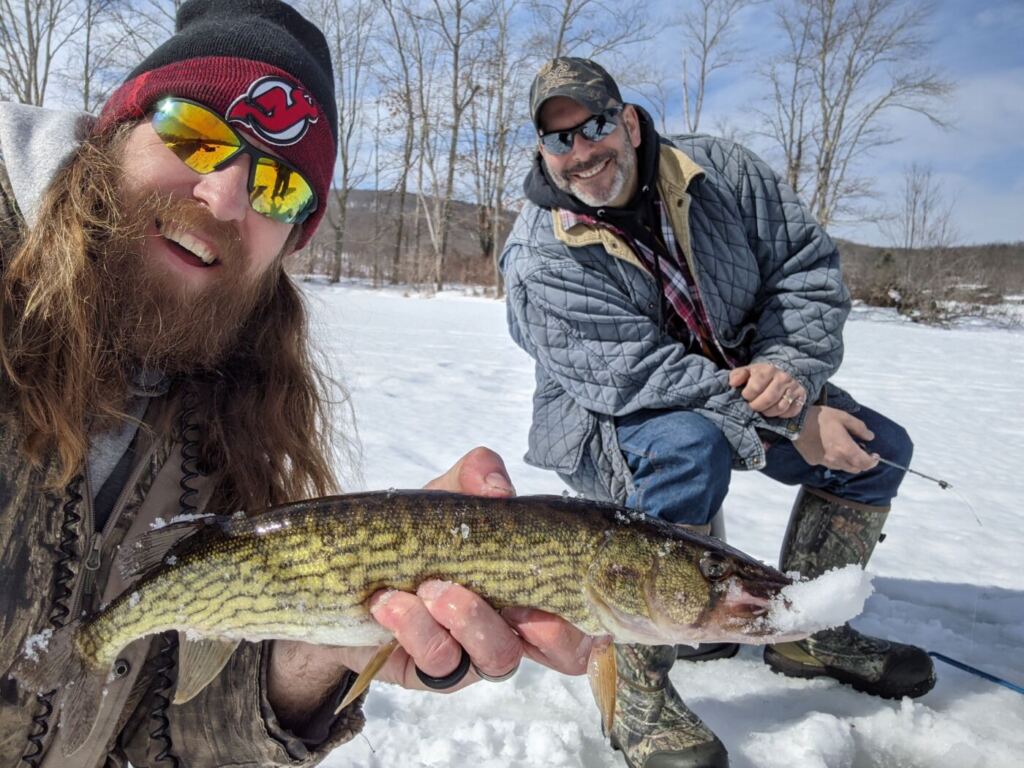 Lake Hopatcong is #1 on the list of ice fishing spots in North Jersey where you’ll find plenty of pike. Photo courtesy of the New Jersey Department of Environmental Protection

“A lot of it has to do with weather systems and barometric pressure. When the storms come in and the pressure drops, the fish are going to feed really, really hard,” said Keith Griglak, senior Fish and Wildlife biologist for the Department of Environmental Protection of New Jersey, which also hosted a webinar on YouTube called “The Greatest Ice Sport: Ice Fishing in New Jersey.” He added: “Ice fishing really levels the playing field. You don’t have to have the biggest, fastest boat. You don’t have to have the most expensive rods; you don’t even have to have a rod and reel. Anyone can be successful without spending a lot of money . You can make it expensive if you want, but you don’t have to, and it’s a way to get a lot of people out at the same time. If you’ve got warm boots and a windbreaker, come on out and let’s have some fun.”

At the end of the season, if there is water on the ice, the ice sure won’t reign much longer, unless the cold refreezes it. Also, stoneflies crawling through the ice signify the end of the ice fishing season and the beginning of the open water. So the season is short, so get out there when and as often as you can. Just make sure you have a fishing license and follow New Jersey state regulations. (Visit NJFishandWildlife.com for a summary of the regulations.) 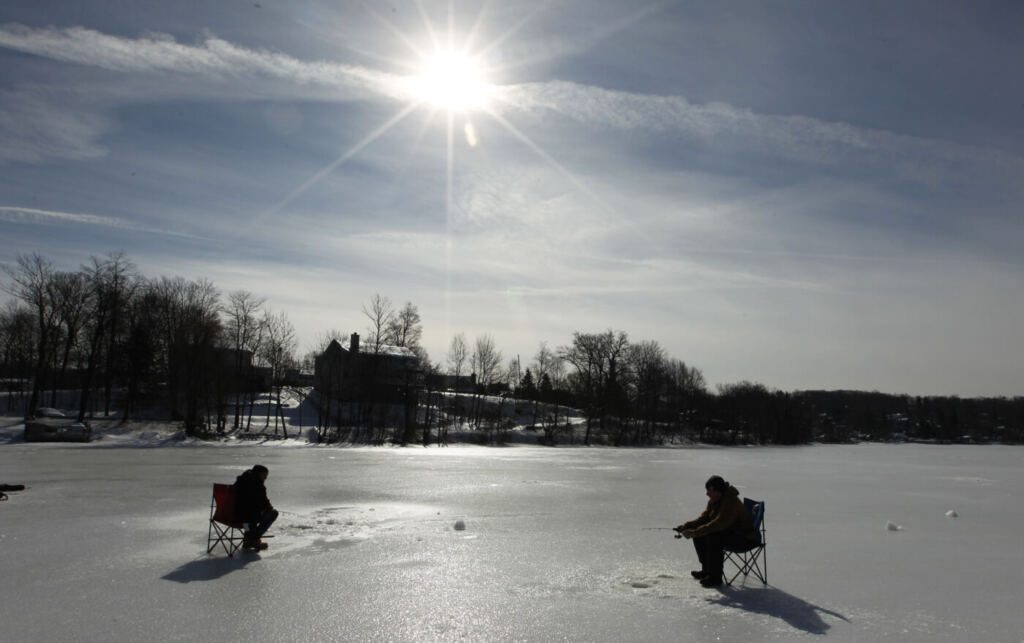 Budd Lake in Morris County is a destination spot for ice fishing because it is shallow and elevated compared to neighboring lakes. Photo courtesy of NJ Advance Media

Griglak agreed that New Jersey has very good waters for ice fishing. “Northern New Jersey is the southern limit of reliable ice fishing in the entire country, at least on the East Coast. If you go through the Midwest, it’s popular, but as far south as you go (ice fishing) really it’s not reliable. If you go anywhere south of New Jersey, you’re looking at Delaware, Maryland and Virginia. There’s no ice fishing down there.” Then he returns to his home state. “North Jersey, north of Route 80, you’re pretty much guaranteed ice almost every year. And once you get down closer to I-78, it’s not as guaranteed, and once you get south of Trenton, it’s shit. A near I-195, Assunpink and those lakes, don’t have reliable ice every year, and if they have 5 inches of ice, Lake Hopatcong will have 15 inches of ice.

As for the counties below the center of the state? “I would say once in a very blue moon; once a decade, maybe. I know the Mullica River has known ice fishing for white perch as long as they get safe ice there. It’s not an annual thing. When they get safe ice, that’s the time to go out. You may not see him again for another 10 years.

“It has to do with ice availability,” Griglak said when asked if an angler will travel many miles to get to a prime spot. “Guys that live in Middlesex County, Somerset County, Mercer County, if they want to go ice fishing, they might have to drive an hour north.” 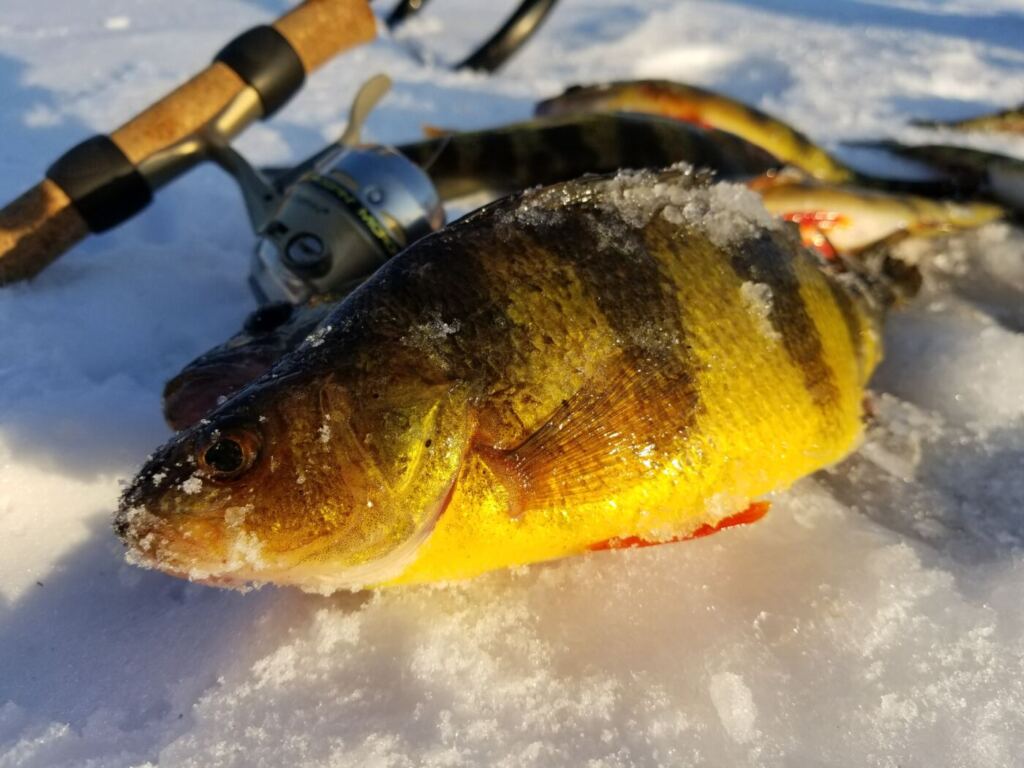 Yellow perch are a common catch in Clinton’s Round Valley Reservoir. Photo courtesy of the New Jersey Department of Environmental Protection

And for good reason. Per Griglak, Lake Hopatcong is #1 on the list of ice fishing spots in North Jersey. “It’s diverse in the species you can catch and it’s relatively far north compared to a lot of other places. Lake Hopatcong has it all. Perch and walleye are usually two of the most active species you’ll catch through the ice . People here will be jigging, and if you’re jigging, you’re probably going for panfish, your various species of sunfish, your perch and your fish. Perch and minnow are the most sought after types of fish. when ice fishing.” The guys that are tip fishing, the two most common species they are catching with their tips would be walleye and bass. But Lake Hopatcong does have a walleye fishery; guys will fish for muskie (muskellunge), there’s always a chance for a hybrid, chance for a catfish or trout. Whatever’s in the lake, you can catch it.”

Clinton’s Round Valley Reservoir, when frozen, offers opportunities to catch lake, brown and rainbow trout. The 520-acre Swartswood Lake is located in Stillwater and Hampton townships and has a large population of walleye. So this gives anglers the added advantage and opportunity to catch another variety. “Cranberry Lake has public access,” Griglak explained. “This is another place where you can catch a lot of bass and pike. The walleye seem to be one of the species that people have a lot of success with because they don’t mind the cold, frozen water. One of the places that always has ice first it would be at High Point because of the higher elevations, and that’s where the bass, walleye and walleye will bite.” 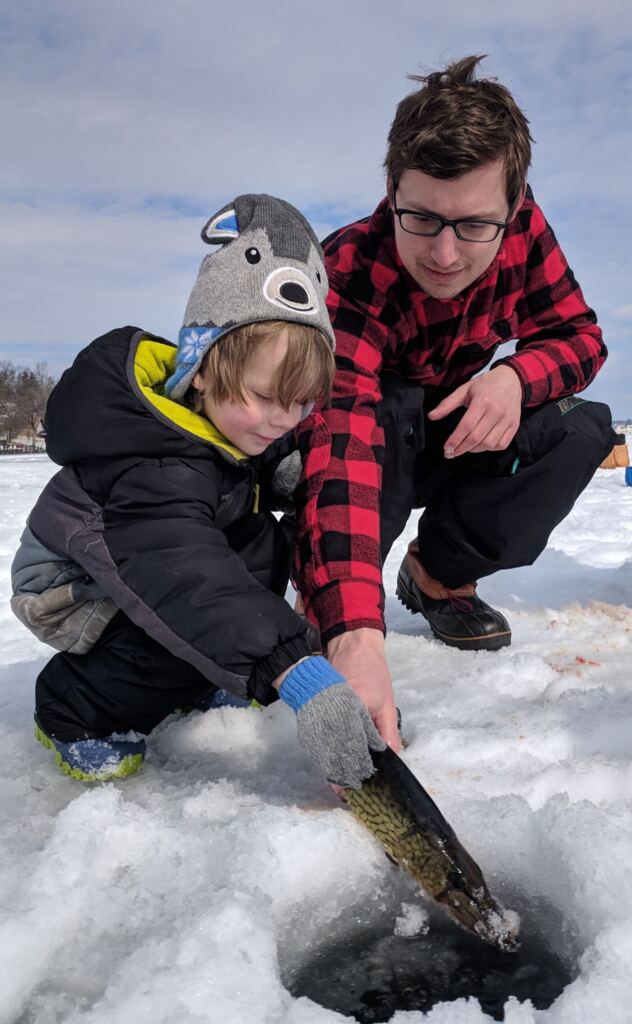 The fun of ice fishing can be enjoyed at several locations in northern New Jersey, as well as some in southern New Jersey. Photo courtesy of the New Jersey Department of Environmental Protection

Northern pike can be caught in Pompton Lake in Passaic County and Budd Lake in Morris County. “Bud Lake is very popular,” Griglak said. “This is known for its northern pike fishing, so it becomes more of a destination spot. This is one of the first places people think about that it also freezes over very quickly compared to a lot of other lakes. It’s it’s at a little higher elevation and it’s a shallow lake, so it freezes a little faster than some of the deeper lakes.”

There are also some sites that have become more popular in recent years. “One of the things that’s changed the demographics or what people are fishing for is that we’ve started stocking landlocked salmon over the last 10 years or so, so the lakes are stocked with them,” he said. Griglak said. “One is Tilcon (lake), which is off Waterloo Road (in Stanhope). It was a quarry at one time, and they flooded it and turned it into a lake that has a lot of fishing pressure for landlocked salmon . The same goes for Lake Aeroflex, which is north of Byram, and Lake Wawayanda in Wawayanda State Park. I think having a landlocked salmon fishery that we created has really drawn people to those certain lakes that have been stocked.”

“It’s good,” Griglak said of ice fishing, for several reasons. “It’s easy to make fun for a group of people and can be a great family activity. Many times, you can even cook with ice. It’s one of those things that I don’t find fun doing to myself. You’ll see people out there having a good time, grilling and just hanging out, away from cabin fever.

Steve Sears has been a freelance writer since 1996. He currently writes for various online and print publications and recently completed a children’s book. He is now working on a non-fiction offering about nature and spirituality.

This article originally appeared in the Winter 2022 issue of Jersey’s Best. Subscribe here for in-depth access to everything that makes the Garden State great.

Delivered to your inbox on Thursdays every other week, Jersey’s Best is pleased to offer a FREE subscription to Garden Statement, highlighting the most popular Jersey’s Best content.