Students taking a new biology course at Eastern Michigan University (EMU) in Ypsilanti are getting hands-on experience that could break new ground in research on invasive freshwater jellyfish.

EMU biology professor Cara Shillington says she was surprised that there wasn’t much published research on the subject of small freshwater jellyfish (craspedacusta sowerbii, also known as the flower jellyfish peach) that his students examined at Pickerel Lake in Dexter Township. .
Cara Shillington, professor of biology at EMU.
Before starting the jellyfish research course in the fall of 2022, he contacted several organizations, including the Michigan Department of Natural Resources and the Great Lakes Environmental Research Laboratoryto see what they knew about this non-native species.

“No one was tracking any of this,” says Shillington. “I like doing surveys and looking at changes over time, so we’ll have a class every fall semester, go out and do a sampling, [and] see what things are changing and what remains the same.”

“Everyone should take an invertebrate class”

Shillington teaches biology students about invertebrates of all kinds. He began by specializing in tarantulas.

“Everyone should take a class on invertebrates. They’re 96 percent of the animal species on earth,” says Shillington. “The range of what they look like, the way they live, [and] the diversity is incredible.”

Shillington says there are two phases in the life cycle of all jellyfish. The first is a sedentary polyp stage, when they settle and adhere to vegetation or the soil of a body of water. The second stage, or medusa, is the adult stage that most people imagine when they think of jellyfish. When many adult jellyfish appear in a body of water at the same time, this is called a “bloom”. 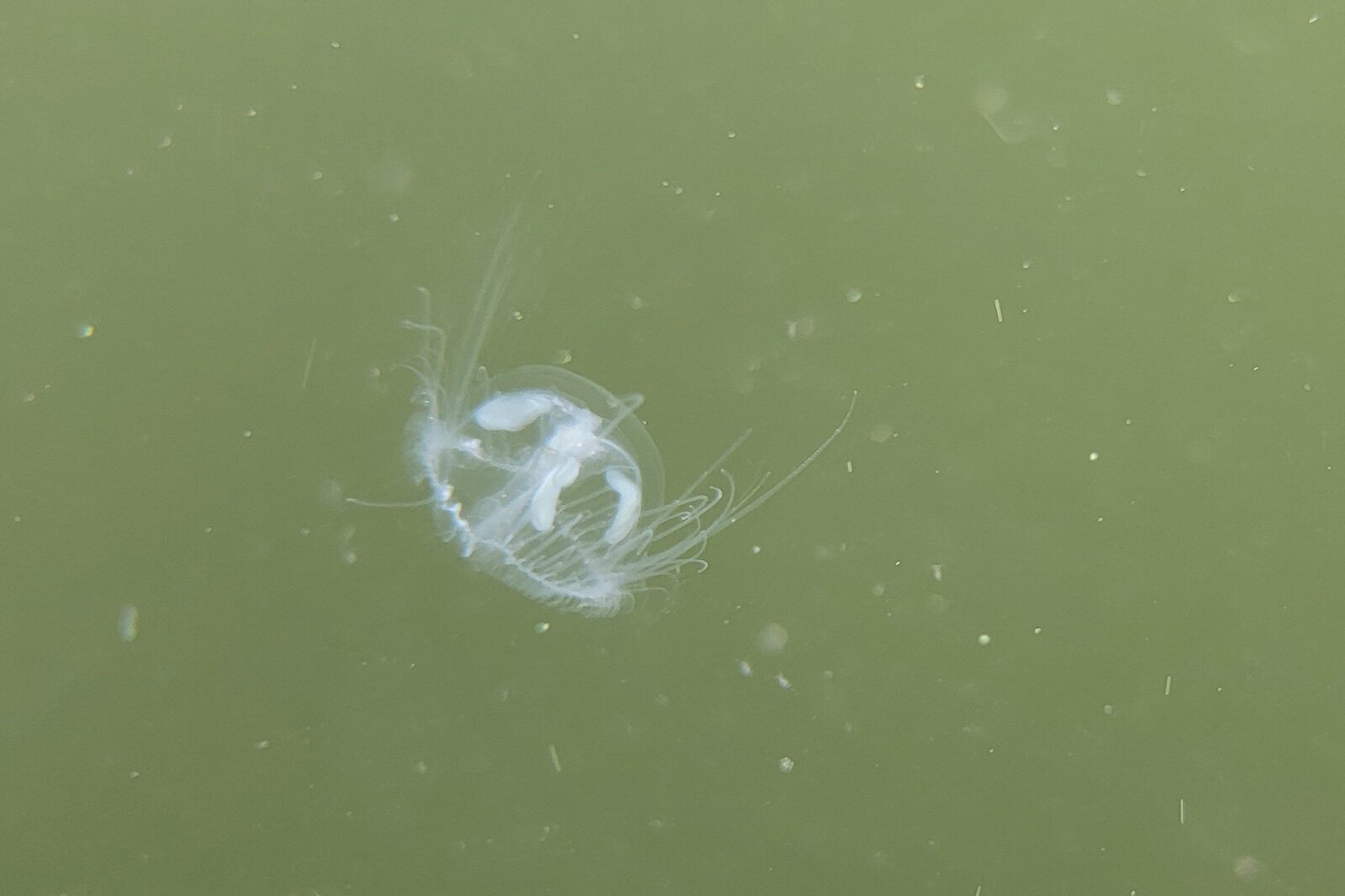 Peach Blossom Jellyfish at the Eastern Michigan Biology Lab.
Because the survey work is so new, Shillington says she and her students aren’t entirely sure what a normal jellyfish “bloom” season looks like in Pickerel Lake. Studying them year by year will help establish patterns. So far, blooms seem to be most abundant in August and September, so students had about a month of fieldwork at the beginning of the semester to collect samples to take to the campus lab. Shillington says there may have been more jellyfish in the lake in 2021.

“We talked to people who live on the lake or swim in it, and they say we missed the real bloom,” he says.

Lance McCarty, an EMU senior majoring in environmental science, was part of the inaugural jellyfish course and says it was “a great time.” He says students would swim across the lake, carrying bags to catch jellyfish, while others would follow in a kayak to record water data such as temperature, turbidity and clarity.

“The jellies we collected were brought back to the EMU campus where we were able to make other observations about them such as behavior, size, reaction to light or feeding habits,” says McCarty. “My favorite part of the class was being in the water and seeing the aquatic environment. It’s a rare experience. It’s so exciting to see the variety of plants and fish, and it’s so much fun to see the jellies.”

What’s next for the jellyfish course?

Undergraduate student Rachel Koski has also been working on jellyfish and plans to expand on the work already done for her master’s thesis. This spring, she will visit the lake to track jellyfish earlier in the year so her class can get a better idea of ​​the size of a typical bloom and when the blooms are most abundant.

“Freshwater jellyfish have been seen in the Great Lakes. I grew up on Lake Huron and spent 22 years of my life not noticing them,” he says. “It was a really great opportunity to get undergraduate and graduate students into the field and into the water, which is not common with classes here at EMU.”

Shillington says that while jellyfish are technically “invasive,” no one knows if they’re harmful. One possible effect this study might find is that native larval fish could suffer from competing with jellyfish for the same diet of small zooplankton, he says.

“As far as we know, they don’t seem to have a major impact, but nobody has necessarily done that kind of study,” says Shillington.

Koski says it’s exciting to see so many “gaps in the jellyfish literature,” because that means many fruitful avenues for study and journal submissions. She is also delighted that her interest in marine biology can be satisfied close to home. 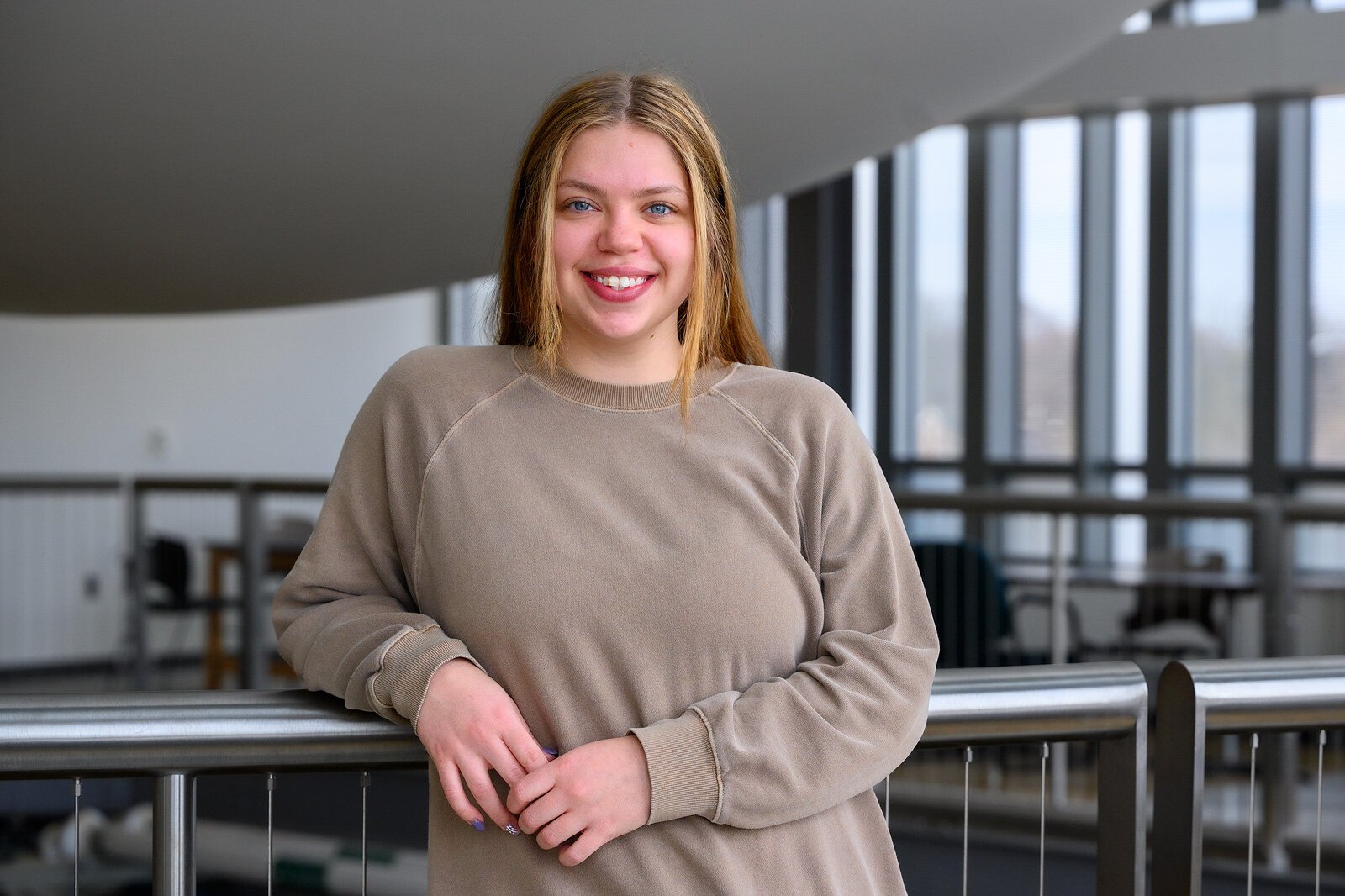 Rachel Koski, EMU undergraduate student.
“When I finished my degree, I planned to do some sort of research in marine conservation if I could,” he says. “Towards the end of my high school [studies], I found very interesting corals and jellyfish and stumbled upon the study of freshwater jellies. And I’m staying in Michigan, which I love.”

Shillington says several people contacted her after reading one EMU Today article about the course A man had done some research on freshwater jellyfish in the 1960s and told her about his experience. Another person who lives on a private lake invited Shillington’s class to do fieldwork there in the future.

“It’s really fun to hear from people who had knowledge and interest in this,” says Shillington.

Shillington says she hopes to also incorporate some community outreach and education into the research project in the future, such as teaching visitors on-site at local lakes about jellyfish or taking samples to local schools.

“Last fall was my first time teaching the class, so a lot is up in the air,” says Shillington. “We don’t know exactly what’s going to happen with the jellies. We’ll go out into the field as much as we can next year, get a lot more organized, and then we’ll know a little more.”

Sarah Rigg is a freelance writer and editor in Ypsilanti Township and a project manager for In Ypsilanti Land. She joined to concentrate as a news editor in early 2017 and occasionally contributes to others Theme Media Group publications You can contact her at [email protected].

All photos from Doug Coombe.