Salmon season 2022-2023. Back in the day, the fishing year for many Canterbury anglers would start with a whiting point starting in mid-August, followed by sea trout fishing from October. Launch at the opening of the high field on the first Saturday in November and the fishing year was underway. The length of the white season has been drastically reduced from 2022.

However, these early season activities will serve for many as the main entry to the main event, salmon fishing. “Chasing silver” would begin in mid to late November and continue into late March, peaking in mid to late February, depending on the particularities of each river. There would be some overlap, but generally, that’s how it was done.

Canterbury does not have the great quality that sea anglers enjoy from the Malborough Sounds northwards. We have been blessed with great salmon fishing here all our lives. There has long been a strong salmon fishing culture in places like Christchurch, Ashburton, Timaru and all over. The knowledge of the game, when, where and how to catch them is passed down to each successive generation.

Wild sea salmon are not easy to catch. Success comes from a mixture of knowledge, time on the river, persistence and yes even a little luck!

One of the main precepts of successful salmon fishing is that these fish wait for no man or woman. You have to go out and fish them while they are there running the rivers when the rivers are clear and fishable. Many will not know that at least some fish will enter our rivers from the sea and run to their spawning grounds in the headwaters even when the river is in full flood, dirty brown and with whole trees floating downstream.

No two salmon fishing years are the same. It’s always a bit of a roller coaster. It is very difficult to predict how each season can turn out. There have always been ups and downs. The 1999/2000 season was a disaster with only about a third of the number of fish returning to our rivers compared to the previous season. These fish were at the edge (thin for their length), indicating poor feeding conditions in the sea.

You can read all about it and the alarm it set off here at Salmon Fishery in Crisis. Paul Hodgson convened a meeting in Christchurch, attended by representatives from Fish & Game, NIWA, the Salmon Anglers Association, Rakaia River Promotions, fishing clubs and several leading fishing tackle retailers, to discuss the current poor state of the salmon fishery, possible causes of the rapid decline, and considered a number of options to improve it. That was over 20 years ago.

Bruce caught this first salmon of the season in the Rangitata River on 8 December. It weighed 15 pounds.

By January 2023 it is clear that the salmon fishery is in bad shape. Returning salmon weigh less than their length. Again, feeding conditions at sea are almost certainly the cause. Global warming and rising sea temperatures are bad news for salmon and the species they feed on while at sea.

I support Fish and Game with their two-fish bag limit for the whole season, the aim of which is to ensure the survival of Quinnat salmon in New Zealand’s South Island. The more fish that come into the spawning streams at this time, the better for the fishing in general.

Unfortunately, things are not the same as they were during the 2022-2023 salmon season, with the salmon fishery in Canterbury! Hopefully in the future we will see an increase in the full season bag limit.

I get a lot of messages from anglers about the family fishing license. People complain about its high cost and the fact that it hurts families to be able to catch salmon. If a family member lands, keeps and records two salmon on their catch card, it effectively means that the salmon fishing season is over for everyone else in the family even if they didn’t catch any fish!

I guess Fish and Game’s thinking would have been that if the bag limit for a family license was set higher than that of an individual license, many anglers would simply pay the extra odd $40.00 for the right to catch more salmon A good analogy can be drawn between the likelihood of this happening and the car-free days proposed by the government after the second oil shock in 1979. Many people avoided this by simply buying a second car and proposing a different car-free day for that.

The season-long two-fish bag limit has changed the thinking of salmon anglers in several key ways. The salmon fishing vine doesn’t seem to work like it used to. Many fishermen are more secretive than in the past.

30 years ago, one would get a phone call from a mate saying something like: “There were 71 salmon caught on the tide at Rangitata this morning. You’ve got to come down here.”

Today, with the two-fish bag limit for the entire season, it doesn’t seem to make much sense. Apart from the fact that the South Rangitata Huts catch board only records a total of seven salmon for the season so far this week. I remember when dozens were caught every day and they were big fish too! 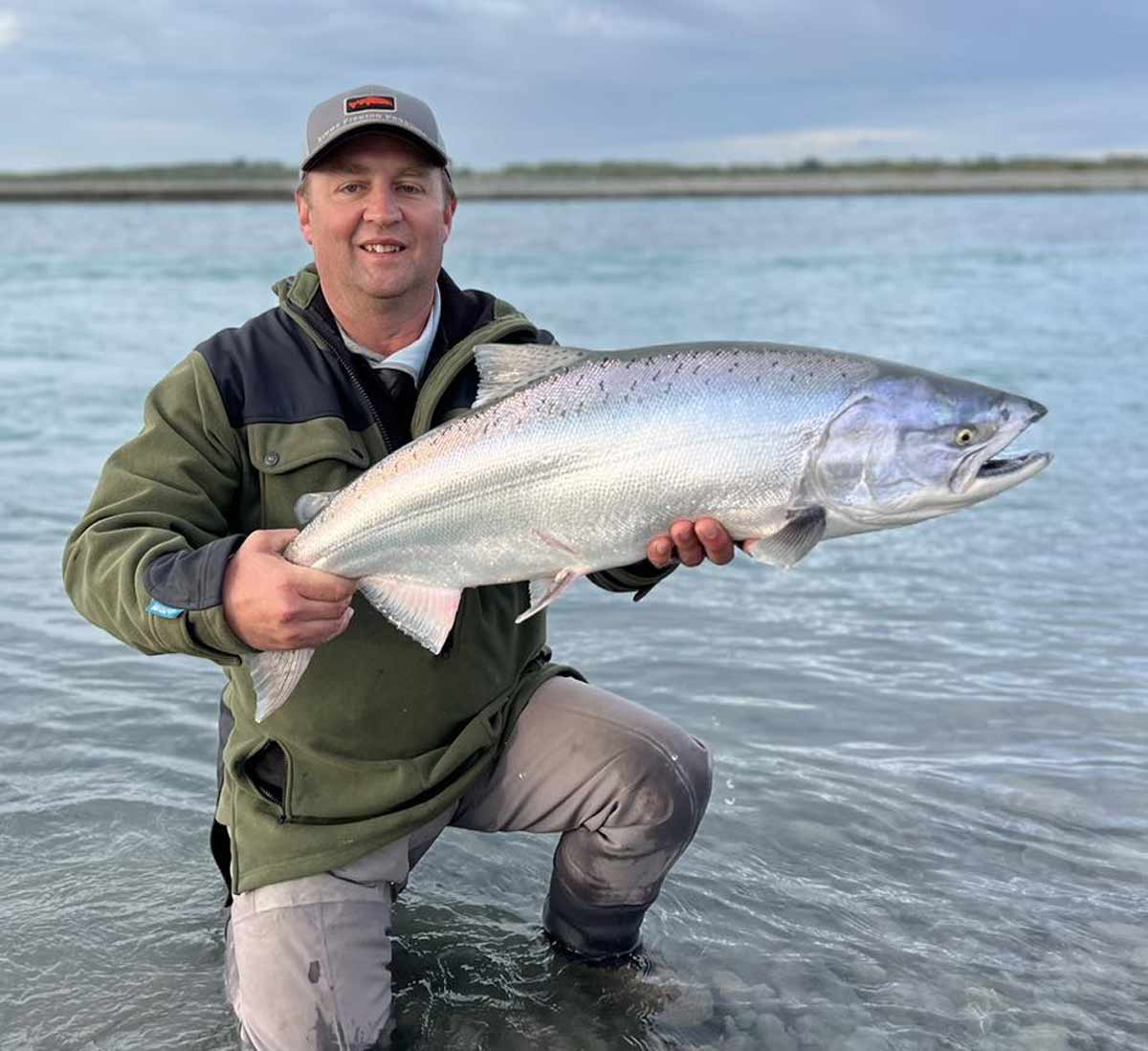 Top Canterbury salmon angler Simon McMillan of Hunting and Fishing in Christchurch caught this beauty at Rakaia in December 2022.

Peculiar aspects of our new normal

The Rakaia Salmon Fishing Competition will take place from 24-26 February this year 2023. With the season-long bag limit now set at just two fish, anglers wishing to take part in the competition are faced with a rather unusual dilemma. In order to catch salmon during the competition held at the end of February, anglers will have to keep their “powder dry” so to speak by not catching and keeping any salmon during the period that would “maximize” their salmon catch. cards

Another odd effect of the current Fish & Game licensing regime is that if three members of the same family purchase a family fishing license at a cost of NZD$188.00 and enter the competition, only two of them can keep and introduce a fish.

Aside from the possibility of arguments within the family, this will surely lead to contestants practicing catch and release in hopes of catching and landing a heavier salmon. The danger with this strategy is that the fish they released could end up being the only fish they caught during the three days. Without forgetting that if they were “lucky” to fill in the catch card during the first hour of the first day, they will not be able to fish any more for the remaining three days.

If a family member has already caught, kept and registered a salmon on their card, our same hypothetical family will only be able to catch a single salmon between them during the contest.

Unless, of course, money is no object and they all buy individual licenses. For hobby kiwi anglers traveling to Rakaia from outside the North Canterbury Fish and Game region, the cost for a husband and wife with two teenagers would be $348.00 plus four catch cards at 5.00 dollars each

Adults could purchase a short break license for $52 plus two $5.00 catch cards, but that would only entitle them to fish for three consecutive days throughout the year.

If last year was anything to go by, the numbers of salmon returning to Canterbury’s rivers could disappear as easily as they build up. January, February and March are some of the driest months of the year on the Canterbury Plains. Without rain, major East Coast rivers are expected to be very low and water temperatures will warm to dangerously high levels for salmon trying to reach their spawning grounds in the headwaters.

Daytime temperatures in the Rakaia and Waimakariri rivers can reach 26C or higher during daylight hours, and still be 21C at midnight. With such high temperatures the salmon will die.

My advice is that when Canterbury’s rivers are fishable your best bet is to get out there and try to catch a salmon when you can rather than waiting until later in the season.

I would be very interested in your comments here on the points raised in this article below or on Fishingmag.co.nz on Facebook.