Watch the terrifying moment a fisherman is almost dragged into the river by a furious saltwater crocodile after he was taunted with a bait.

A man narrowly escaped being dragged into the river by a saltwater crocodile after he aggravated it with his fishing rod.

Fisherman Kody Duncan was filmed approaching the crocodile while at Wujal Wujal Falls, north of Cairns in Queensland, on Saturday.

Unlike their saltwater relatives, freshwater crocodiles are known to run away from humans and only attack if their territory is threatened.

However, the saltwater crocodile sitting just underwater in Wujal Wujal seemed ready for a fight.

Fisherman Kody Duncan narrowly escaped an angry crocodile at Wujal Wujal Falls, north of Cairns, on Saturday after he provoked it with his fishing rod (pictured)

In the footage, Mr Duncan zoomed in to show the crocodile lying motionless in the clear water, sarcastically calling it “a strange looking record”.

He then began splashing the bait from the end of his fishing rod into the water just above the crocodile’s head.

Mr. Duncan had barely dipped the bait into the water twice when the crocodile came running out of the water to chase Mr. Duncan.

Luckily, he escaped the angry crocodile, ironically with a couple of crocodiles.

Duncan posted the footage on TikTok, gaining over 900,000 likes and nearly 5,000 comments.

‘Carrying alligators when you’re being chased by an alligator. What a show,” wrote a second.

“Why did you think to do that?” a third interrogated.

Mr Duncan responded by saying: “Honestly, I don’t know what went through my head.” 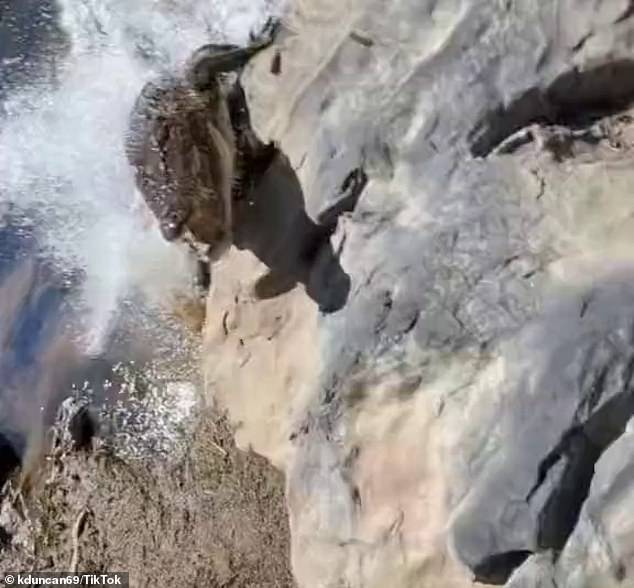 Although usually more shy than its saltwater relatives, the freshwater crocodile quickly breached the water (pictured) forcing Mr Duncan to flee, ironically while carrying a pair of crocs.

The Wujal Wujal Council offers numerous safety tips for visitors entering the area, including advising people to stay away from the water.

“Our common local law recommends that you stay at least five meters away from the edge of rivers, lagoons and water wells at all times,” the council advises.

“Our wildlife, even dangerous species like our crocodiles and snakes, tend to be shy around humans and would prefer to stay out of your way unless you get too close to their territory.”

The crocodile was almost 400km from its usual habitat in central and north Queensland.